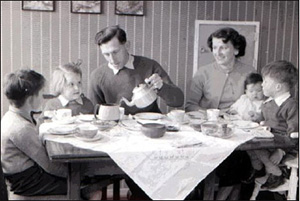 The father is gay, the mother wants a real job, the boy on the left listens to Rock and Roll, the boy on the right smokes weed, the little girl is dating a black man, the baby is a communist, and the unseen fifth child was institutionalized for having a birth defect. But for God's sake don't say anything!

The Fabulous Fifties: An era of identical pink pressboard suburban houses filled with smiling, apron-clad housewives. All the men wear slippers and fedoras and smoke pipes, all the girls are teenaged and wear poodle skirts, and all the boys are cute, freckle faced scamps with slingshots in their pockets. Parents sleep in separate beds and only kiss each other on the cheek.

Anyone who isn't any of these characters are either greasers, Beatniks, gas-station attendants, or Elvis (who, in this era, wouldn't be caught dead in a rhinestone jumpsuit). With the possible exception of the gas station attendants, everyone on that list is a direct threat to the upright morals and values of the era and will not be afforded a spot in the basement bomb shelter when the Reds drop The Big One. Meanwhile, Martin Luther King and the burgeoning Civil Rights Movement stride across America, slowed down only by the occasional Corrupt Hick. The birth of rock 'n' roll took place in this era, to the horror of Moral Guardians, which also showed a resurgence in popularity.

At least that's the popular view of the real Fifties. In media, there are three versions of The Fifties. The first is the Fifties Fifties, i.e. how the time was portrayed in many works that were actually made then. In this version, The Fifties were a suburban paradise where everyone was always happy, either forgetting the bad events that happened during the last decade or reminiscing the prosperous times of previous decades, and there were no problems except for all those juvenile delinquents running around. Unless the local college had some commies spreading un-American values or the flying saucers are landing. The fifties uptightness was linked to real world social anxiety and atom-bomb jitters, after all. Don't expect the civil rights movement to show up. Hell, seeing actual black people is a bit of a crapshoot. The Fifties Fifties are now a popular subject of The Parody.

The next version is the Nostalgic Fifties of The Seventies and The Eighties. By that time, there were a huge number of adults nostalgic for the "simple times" of their youth and Hollywood obliged. The biggest difference between this version and the Fifties Fifties is that the rebellious teenagers are now the heroes. We learn that all the teenagers back then liked to hang out at the local Malt Shop, where a jukebox played Nothing but Hits. The girls were only Seemingly Wholesome and both sexes were experiencing their own Coming Of Age Stories while necking down at the Drive-In Theater and watching Robot Monster.

Finally, there are the Historical Fifties of The Nineties and the Present Day. The Nostalgic Fifties are now starting to die out, (although they've been replaced by The Eighties in spades; Tron: Legacy is a particularly good example of this) as there are becoming fewer and fewer writers in Hollywood who remember the Fifties... and many of these writers are the children of those former "rebellious teens", and take a somewhat more jaundiced view of their parents' upbringing. Therefore, the time period, as portrayed by Hollywood, is becoming more the textbook version. Films about The Fifties today tend more to deal with the political issues of that era (civil rights, McCarthyism, etc.) and less with its teen culture. Which is not to say it is necessarily any more accurate of course, merely that the decade is now filtered more through a political/ideological lens than a nostalgic one and teenagers aren't the only people that matter.

For a glimpse of what (some) Americans actually living in the Fifties thought of their world, read the Time Travel stories of Jack Finney. His heroes are generally lonely, frustrated, unhappy bachelors eager to escape from their conformist gray-flannel-suited world, usually into The Gay Nineties.

Note that Film Noir was a major genre during the Fifties (though more so in the late 40s/early 50s) that doesn't easily fit in with any of the mainstream versions of the decade listed above. This includes modern noir set during the Fifties like L.A. Confidential or The Black Dahlia.

One of the longest cultural "decades"- in many ways its tropes cover the period from V-J Day to the Kennedy assassination, 1945-63, with a shift in trappings in about 1955-57 as TV ownership reached a tipping point, tailfin cars got really wild, Rock and Roll started getting serious radio play and the first wave of Baby Boomers reached Junior High.

Interestingly, the decade has triggered highly contradictory reactions among people who do not remember it well since the 1970s. Fifties cars are still admired aesthetically (in some areas, you can still find them on the street), Fifties clothes are enormously popular for costume parties, and Fifties music (at least, the sort that doesn't sound like holdovers from the Forties) will probably never be thought unfashionable. In addition, many seem to view the decade, with much sadness, as a forever-vanished idyllic time that was infinitely more conservative and family-friendly (although this is not what people actually living through the decade necessarily thought). At the same time, the 1950s is often treated as a sort of historical Butt Monkey - an all-purpose dartboard on which anyone who is irritated by social repression - especially if it concerns sex - can feel free to take out their frustrations. (Whenever you hear of someone described as having "Fifties values," it usually isn't a compliment.) In some respects, the otherwise-prosperous post-war 1950s represented a huge setback for equality; veterans of colour returned from the World War II effort in the 1940s only to find themselves still at the Back Of The Bus in the Jim Crow 1950s, while women who occupied Rosie The Riveter-style wartime manufacturing jobs were now barefoot in the kitchen.

But those who wish to Flanderize an entire decade should know that the 1950s were actually marked by great strides forward in social progress, sexual and otherwise. And in any case, they were a lot less repressed than the eras that preceded them. The decade was also a period of relative stability and unprecedented optimism, both probably enhanced by comparison since the period was bracketed by the horrors of World War II and the upcoming turbulence of The Sixties. This was particularly prevalent in the US, which had not only triumphed in the war but, more importantly, was just about the only major nation to come out of the conflict with its infrastructure intact. With no rebuilding to do, the focus was on innovation; there was a strong belief in the prospect of limitless progress through science and industry, which led to a lot of gee-whiz science fiction that's now covered with Zeerust. It's no coincidence that the ultimate embodiment of optimism, Disneyland, opened in 1955, with its cornerstone of Tomorrowland, promising a "great big beautiful tomorrow." Compare Aluminum Christmas Trees.

See Also: The Roaring Twenties, The Thirties, The Forties, The Sixties, The Seventies, The Eighties, The Nineties, Turn of the Millennium and The New Tens.

Fifties slang. If you want to talk like it's the Fifties, be sure to use these words:
The Fifties provides examples of the following tropes:
Examples of The Fifties include:

Examples of the "Fifties" Fifties

Music Genres That Started in the Fifties

Examples of the Nostalgic Fifties

Examples of the Historical Fifties

Examples which don't easily fit into any of the above

Works made, but not set, during the fifties

Retrieved from "https://allthetropes.org/w/index.php?title=The_Fifties&oldid=1927621"
Categories:
Cookies help us deliver our services. By using our services, you agree to our use of cookies.