Everything About Fiction You Never Wanted to Know.
Jump to navigation Jump to search
/wiki/George Harrisoncreator 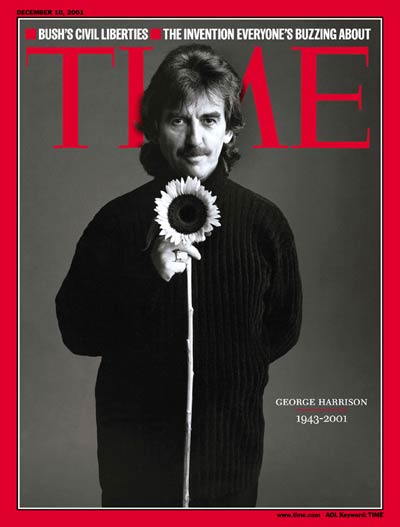 For instance, not only was he great with the guitar, but he also introduced the band to new instruments like the sitar that gave the band whole new sounds to use. He endeavoured to write his own songs, but he found that his efforts weren't being taken seriously by John and Paul and he was relegated to one or two tracks on each album. However, he persisted and by the time of the band's final produced album, Abbey Road, he firmly proved that he was their equal with the classic songs, "Something" and "Here Comes the Sun." Still, he finally got to fully stretch his wings post-breakup with his solo album, All Things Must Pass, the biggest selling ex-Beatle solo album to date. In addition to his artistic rise, he also used music to do direct social good, most famous for creating the first rock benefit concert, Concert for Bangladesh, to help that poverty stricken country recover from a devastating typhoon in the early 1970s.

In addition, he became a film producer with his own film company, Handmade Films, which among other things was responsible for producing and distributing Life of Brian and Time Bandits. The company continued on after he left it in the late 80's and its produced a handful of films since then, including Lock, Stock and Two Smoking Barrels and One Hundred and Twenty Seven Hours, which in a way owe their existence to Harrison.

A documentary directed by Martin Scorsese, George Harrison: Living in the Material World, was released in October 2011.