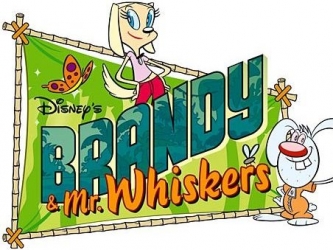 Brandy & Mr. Whiskers was an American animated television series about a snobbish dog and a hyperactive rabbit that get stuck in the Amazon Rain Forest together. The show originally aired from August 2004 to August 2006. It was televised in the United States by Disney Channel, and then aired on Toon Disney.

Brandy and Mr. Whiskers start getting acquainted as they began their new lives in the Amazon Rain Forest. They build a treehouse to live in, using debris that fell out the plane's cargo compartment ... along with them. A big part of the series is Brandy's desperation to getting back to her home in Florida. In the meantime, both she and Mr. Whiskers adapt by exploring the environment and making friends with the native animals. Brandy makes attempts to get the jungle to become a civilized society by introducing elements such as fashion, hygiene, and currency ("shiny rocks"). Mr. Whiskers prefers to mix things up by using the powers of invention and imagination to occupy his time, but it usually causes havoc in the jungle. This affects his popularity. As Brandy and Mr. Whiskers get more settled in the jungle, a lot of changes are put in order. They redecorated the treehouse by giving the interior a more "homely environment", which includes flowery wallpaper, tasteful decor, and an indoor bathroom (this was after Mr. Whisker's new "dream house" was destroyed). The native animals have also become more anthropomorphic as they have now established a new market economy in the Amazon. They have developed clothing, consumer products, restaurants, theme parks, TV commercials, a boy band called Sugartoad, and a shopping mall. These drastic changes are possibly the cause of Brandy's influence to use shiny rocks as currency. The lack of adaptation has also lowered Brandy's desire to getting back home (as it is not as mentioned).

Tropes used in Brandy and Mr. Whiskers include:
Retrieved from "https://allthetropes.org/w/index.php?title=Brandy_and_Mr._Whiskers&oldid=1749733"
Categories:
Cookies help us deliver our services. By using our services, you agree to our use of cookies.