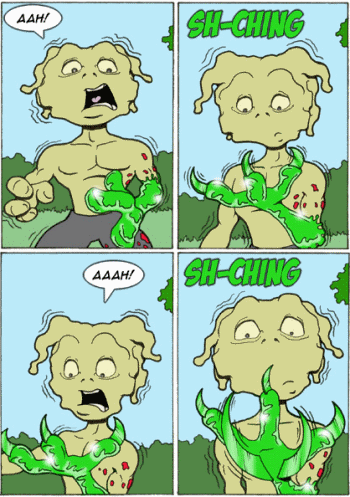 "For the love of gods, watch where I point those swords!"

This trope is for when parts of the body have "minds of their own" and will control or influence the brain of whoever they're attached to. Typically happens when said limbs aren't normally a part of the body, as happens to a Frankenstein's Monster or Shapeshifter Mashups.

When this happens but only the body part is shown, it's an Independent Limb. Related to Animate Body Parts. A supertrope of Evil Hand.

When a physical part other than the brain (usually the heart or liver) is the source of a person's emotions, see Cardiovascular Love.

Examples of Organ Autonomy include:

Retrieved from "https://allthetropes.org/w/index.php?title=Organ_Autonomy&oldid=1887287"
Categories:
Cookies help us deliver our services. By using our services, you agree to our use of cookies.