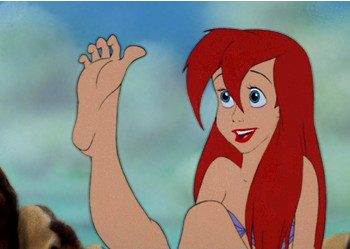 Ariel, fascinated by her new feet.

Closeups of bare feet, mainly for the purpose of showing those bare feet.

This is notable because most people tend not to notice feet. They're far from eye level, often hidden inside shoes or otherwise out of view. This is why whenever visual media features closeup shots of bare feet, it's a noticeable occurrence. Regardless of the reason the feet are bare, this is about explicitly focusing on these bare feet.

Close-ups of bare feet are often used to imply nudity/intimacy in settings where full nudity cannot be shown (television, movies, article pictures, etc.). This implication can be made explicit by Dress Hits Floor. Non-sexually, barefootedness can symbolize the character being bare of worldly concerns, or Barefoot Poverty.

It should also be noted that bare feet and ankles were once considered obscene. Thus showing them in those times was actually all but pornography. Even these days, some uses of this trope are Fan Service, and even if not, they are Fetish Fuel to the viewers, or Author Appeal to the creators.

You might notice that most of the examples below involve female characters. That's because Most Writers Are Male, although women, at least in the west, are generally more comfortable going barefoot than men.

A Sister Trope to Does Not Like Shoes (which doesn't need closeup shots), She's Got Legs (showing off the legs through closeups and/or clothing), Male Gaze. If the closeup is intimidating instead of sexy, it's Fearsome Foot.

Do not put examples that do not have an actual focus on the feet. Merely going barefoot is Does Not Like Shoes.

Examples of Foot Focus include:

Retrieved from "https://allthetropes.org/w/index.php?title=Foot_Focus&oldid=1936207"
Categories:
Cookies help us deliver our services. By using our services, you agree to our use of cookies.