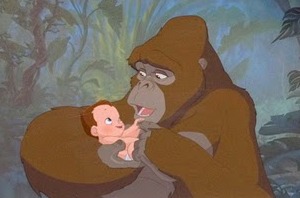 A character who lost their human parents and was raised by animals.

Animals in fiction range from the almost human to the bestial, but since Most Writers Are Human, animals tend to think, feel and talk like we do. Thus a literal momma bear might be an ordinary parent—or a wildly offbeat role model. This trope ranges from a purely cosmetic touch of exoticism to a comedy trope to a full-blown otherness trope that drives drama.

A sister trope to Raised by Natives—it functions as the same kind of narrative hook.

A character raised by animals will seem unusual to ordinary folk. They may speak crudely or just strangely. They are a Funny Foreigner—but without the risk of offending someone. In more extreme cases they have No Social Skills, and it is common for them to be Not Good with People.

Expect to see at least some discrimination. His adoptive siblings might get over him being funny-lookin', human society might get over them scratching their head with their foot, but he may ultimately be seen as a Halfbreed.

It can be an extreme case of the longing for the Good Old Ways—a vision of the good life before any of the corrupting influences of civilisation, the Noble Savage being In Harmony with Nature. They may be a Nature Hero or a Jungle Princess. Sometimes they pick up powers from their family. Lamarck Was Right: Mysterious Animal Senses abound and having birds for family teaches flight.

In their original setting expect to see Loin Cloths, pelts, Fur Bikinis and Wild Hair. The character sometimes Does Not Like Shoes. A quick route to Fan Service is having No Nudity Taboo.

Even if things are not that bad, expect a tougher, rougher, childhood. But the Upbringing Makes the Hero, so these early trials pay off later. At a minimum, someone who was Raised By Wolves will be a bit wild; impulsive, aggressive or just more in touch with base human drives.

For the most realistic take where lack of human contact makes kids feral and mute, see Wild Child. For social awkwardness in general, see No Social Skills.

Examples of Raised by Wolves include:

Retrieved from "https://allthetropes.org/w/index.php?title=Raised_by_Wolves&oldid=1951312"
Categories:
Cookies help us deliver our services. By using our services, you agree to our use of cookies.