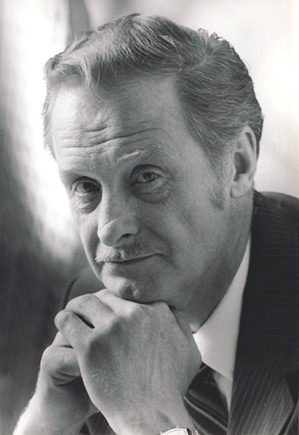 David Eddings was a modern American author who specialized in archetypical epic tales. He died in June, 2009. Most of the books he wrote were High Fantasy, were Doorstoppers, and were part of a long series (some of which were in the same universe,) were Strictly Formula, were Troperiffic, and were awesome.

There was also snark. Lots and lots and lots of snark. Snark which was often used to hang lampshades.

Eddings saw history as cyclic, and so he was willing to recycle plot arcs in his series. "The Malloreon" has a similar structure to "The Belgariad," for instance (which is even used as a major plot point).

Most, if not all, of his books were co-written with his wife, though only the latest gave her shared credit (due to Executive Meddling - his publisher figured that boys wouldn't want to read a fantasy-book with a girl's name on the cover.) This is probably one of the main reasons for the abundancy of strong female characters, who are outspoken and fierce enough to make you wonder how those medieval societies manages to maintain their male-dominated status quo...

Works written by David Eddings include:

Series he wrote include:

Other books he wrote:

David Eddings provides examples of the following tropes:
Retrieved from "https://allthetropes.org/w/index.php?title=David_Eddings&oldid=1848348"
Categories:
Cookies help us deliver our services. By using our services, you agree to our use of cookies.