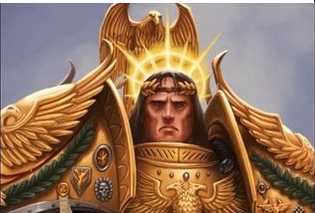 When they call him the God-Emperor of Mankind, they aren't kidding.

A God-Emperor is a sovereign who is claimed, by either self or others, to be a Physical God. This trope can apply to anything from a tinpot tyrant with delusions of grandeur to a Galactic Conqueror or Dimension Lord who has a perfectly accurate assessment of his grandeur.

Given its extreme usefulness in either helping found new religions or unify the recently-conquered into new nations, this trope is Older Than Dirt, and long a staple of fiction or fact.

Compare with Emperor Scientist and Sorcerous Overlord, which is how a good many of them get their start; and The Emperor, to whom the God-Emperor trope may apply also. Compare Priest King, when the ruler is head of both Church and State, but not worshiped themselves.

Note that this shouldn't be confused with the divine right of kings, which was a doctrine holding that kings derive their authority directly from God.

If you're looking for an emperor/king/leader of the gods themselves, see King of the Gods.

Examples of God-Emperor include:

Declaring themselves as gods has been very common to the rulers in ancient history. It handily brought religious and secular power together, and gave the ruler an absolute power, which was always welcome. The Egyptian pharaohs are probably the most famous example of the trend.

Retrieved from "https://allthetropes.org/w/index.php?title=God-Emperor&oldid=1952913"
Categories:
Cookies help us deliver our services. By using our services, you agree to our use of cookies.