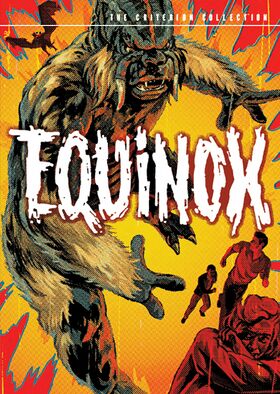 Equinox: A Journey into the Supernatural is a low budget Cult Classic B-Movie from 1968, which is featured in the Criterion Collection. It is notable because its director Dennis Muren later went on to do effects for Star Wars and was a founding member of ILM.

Recut in 1970 by Jack Harris (the man who also produced The Blob) and re-titled simply Equinox, it enjoyed a long run on late night TV and in the drive in circuit. More footage was shot by a different director, who saw fit to put himself in the movie as the new main antagonist, Asmodeus.

Tropes used in Equinox include:
Retrieved from "https://allthetropes.org/w/index.php?title=Equinox&oldid=1364350"
Categories: