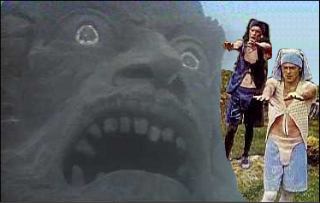 Zardoz explains: "The cult is good. The popular is evil. Go forth...and kill!"

"Cult" is a word that people were saying... a cult is popular as well, of course. You can't have a show that's just weird, that no-one watches. That's not cult, that's just... maybe a bad show that no-one wants to watch.

The air that every Geek breathes, a Cult Classic is a film or other work which has a devoted, even if sometimes small, fanbase. Some Cult Classics are obscure commercial failures at the time of their premiere which have since then successfully attracted a fanbase, even to the extent of becoming moneyspinners. Although this is the common public perception to a Cult Classic, some Cult movies were in fact box-office successes at the time but maintained a cult following long after public interest has moved onto the next flavour of the month. It's probably for this reason that some films with a strong cult following (eg The Blues Brothers) are sometimes wrongly assumed to have been unsuccessful at their time of release.

Cult classics have an unusual shelf life, and seemingly avert the Popularity Polynomial completely. Rather than receiving a short but large burst of popularity before ultimately fading completely into obscurity, cult classics receive a marginal amount of attention almost indefinitely. It's a good bet that a show or movie considered a cult classic 30 years ago will still be such today.

Though some movie studios have intentionally tried to position releases as Cult-Classics-To-Be (like Mirror Mask and Snakes on a Plane), perhaps hiring a bunch of Cult Actors and funky music, it is not usually successful. A true Cult Classic is as rare as capturing lightning in a bottle.

Note that not all cult classics are actually good. Although many of them are, or at least, are remembered as such. In fact, many cult classics are hilariously bad—which is why their fans adore them. These are sometimes called "Camp Classics".

See also Too Good to Last, though this extends to every medium. See also Critical Dissonance when the critics hate it, and Critic Proof when...the critics hate it, also. If it's a critical darling on the art-house circuit, but has no following beyond that, that's the other kind of Critical Dissonance. Contrast Quality by Popular Vote, which is the inverse trope. Compare Stoner Flick and/or B-Movie.[1]

Also note that "cult classic" is an affectionate English expression for a work of this type, and does not mean that it's a "classic" in the same sense of, say, a "classic novel" or "essential work". Unless the fandom are surrounded by a sea of indifference, such usage is too broad to be meaningful, so works such as Star Wars don't count. Otherwise, the phrase would be meaningless, as Roger Ebert has noted in lamenting its misuse, since it does carry certain genre-specific connotations.

The word "classic" may also be seen as an intensifier of sorts, implying works that have become seen as cult over the years, similar to a Sleeper Hit—due to factors such as Audience Participation, Notable Quotables, or other engrossing aspects that attract a select audience who proselytize fervently and disdain non-believers.

One good measurement to use when in doubt, is critical consensus. If a work is commonly described by critics as quirky, fringe, bizarre or off-putting to newcomers, and therefore "cult", then that meets the definition of the trope. If this is actually used as a selling point, then that is a good sign. An even better sign is if critics debate whether or not it's still cult.

On The Other Wiki, "something of a cult classic" (exact words, always; see for yourself) is a well-worn Justifying Edit.

Note that most of these cult classics have their own pages already.

When a cult classic actually does become popular, expect geeks to complain It's Popular, Now It Sucks.

When listing works by the same author, please don't list, say, the entire filmography of a director with a cult reputation. A cult classic should have a small but devout following in the absence of widespread current popular acclaim, in addition to the work itself meeting the definition of the trope. Only list those works by a given author for which the label is justified.

Examples of Cult Classic include:

The Bowdlerized 4Kids dub itself is probably more of your standard Camp Classic since its compellingly awful quality makes for good entertainment. See the comparison.

Burns suppers may be either formal or informal. Informal suppers typically include haggis (a traditional Scottish dish), Scotch whisky and the recitation of Burns' poetry. Formal dinners are hosted by organisations such as Burns clubs... and occasionally end with dancing when ladies are present. However whether they are single sex or not, the formal suppers follow a standard format.

Many tabletop RPGs are a cult within a cult following, including;