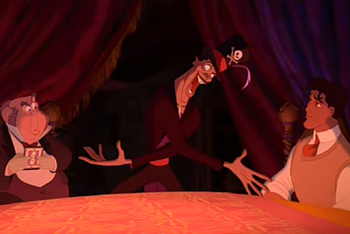 Come on boys, won't you shake a poor sinner's hand?

You know how it works. Want to be a millionaire, or to get back at that obnoxious boss? Well travel down to those crossroads and Mr. S will guarantee your wildest dreams, if you just sign on the dotted line with your own blood. This trope is Older Than Steam, and does not even require the Abrahamic Devil; any Tricksters or evil deity roughly equivalent to Satan can be used. It reached its current version in the 16th-century legend of Faust selling his soul to Mephistopheles (who technically isn't quite exactly Satan or Lucifer, but still a high-ranking demon).

This trope includes both literal soul-for-gift deals with a literal devil, and crooked deals between any corrupt slimeball (the Mephistopheles role) and a desperate sucker (the Faust role). The corrupter can be offering anything from some shiny new Applied Phlebotinum to making a high school nerd popular, to saving your life moments before death. Occasionally it has no practical value whatsoever. He then asks for something—often apparently innocent at first—that means the total ruin of the Faust if delivered: soul, first born, voice, horseshoe nail...

Note that literal devils always follow through with their end, even if their end is a sinister bastardization of the terms. We never see Mephistopheles take the soul and run; he gave his word and put his name on the dotted line. As icing on the cake, the Mephistopheles sometimes makes sure that the Faust's gift is totally useless - especially if there's a chance at Irony, where lacking their "soul", the element they gave up as payment, is the only thing that makes the gift worthless.

An alternate form is a deal where the Mephistopheles offers the Faust exactly what he wants, if not more, but to get it, he has to undergo an Impossible Task Mephistopheles obviously does not think the Faust can complete, with Faust's soul as the penalty if he fails. Alternately, the deal truly has no strings attached, as it's part of a Xanatos Gambit where the Faust's good fortune or success will deliver the soul of another to Mephistopheles.

Whether God or the equivalent would be interested in a soul that someone has gambled is the Elephant in the Living Room.

Deal with the Devil plots can overlap with What an Idiot!. Some writers try to defend the Faust by having the Mephistopheles make the offer when the victim has no time to think (e.g., offering to save him from the Death Trap in return for something nasty) or by making the contract so long no one will Read the Fine Print (Sloth is a very undervalued sin). Also expect Exact Words and You Didn't Ask to be employed against the Faust.

If you should find yourself suckered into a Deal with the Devil, The Power of Love may be your best bet at defeating the infernal contract. Or you can try your luck (literally) with a Jury of the Damned. Some clever heroes can pull off a Pound of Flesh Twist. With enough power, a Faustian Rebellion is possible.

Stories of clever individuals who manage to outwit and cheat the devil are especially popular in folklore.

The character who offers the deal is often, though not always, The Corrupter (and not all Corrupters use this as a tactic).

There is a Inversion of this trope largely forgotten in the mainstream, but still very much in use in some contexts: The Bargain with Heaven. Compare also Reasoning with God.

For the occasions when the Devil comes out behind, see Did You Just Scam Cthulhu?.

Compare Power At a Price.

Examples of Deal with the Devil include:

Retrieved from "https://allthetropes.org/w/index.php?title=Deal_with_the_Devil&oldid=1952347"
Categories:
Cookies help us deliver our services. By using our services, you agree to our use of cookies.