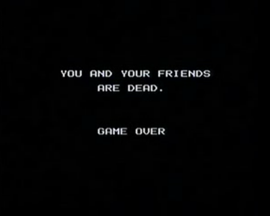 Watch out, Jason's about.

So, things are going pretty well for you. You've beaten your Rival Turned Evil a few times, the Man Behind the Man revealed himself when you killed off the Disc One Final Boss and now you're ready to collect the Plot Coupons and storm his Fortress Of Evil.

But what's this? A Scrappy Level where you must use the weakest character to defend the hero while he stumbles forwards blindly (get ready to fail your mission objectives)? Did you just run into That One Boss unprepared? Are those Goddamned Bats fluttering around just out of reach, scratch-damaging you? Did you step in a puddle? Or are you just out of your depth (wave good-bye to your health bar)? All right, maybe you just made the wrong choice in some dialogue, or it's the developer's fault. Either way it's Game Over for you. ("You have died" is the way Interactive Fiction typically puts it.)

So now what? The nicest games might just let you off with a warning, less forgiving games might make it so that Continuing Is Painful or send you back to a checkpoint. If you're really unlucky, then it's back to the start of level for you... or even the entire game.

Of course if you're really lucky the Game Over screen will simply read Fission Mailed or the game will let you continue anyway.

This is, at its most basic, the condition of having lost the game. Some text or animation appears to let you know you've lost, and there's nothing left to do but start over. You can achieve Game Over by:

In the earliest games, you had to start over from the very beginning, but later games provided a password so you could continue from a later spot, and eventually game saves to fulfill the same purpose more conveniently. Some games also let you 'continue' from the same level you were previously on. Indeed, the Game Over has been such an Omnipresent Tropes that some games use the phrase whenever you have in some way failed, even if this failure does not in any conceivable way end your game.

Some games will even give you a Game Over screen even if you complete the game, using "Game Over" in a literal sense, as since you've beaten the game, it is now over.

A Nonstandard Game Over is a variant that occurs in special circumstances, when you've really screwed the pooch.

Sometimes the screen is accompanied by a Game Over Man (no, not Pvt. Hudson).

Also the name of a single by Club Caviar.

Examples go in the Quotes section.

Retrieved from "https://allthetropes.org/w/index.php?title=Game_Over&oldid=1714092"
Categories:
Cookies help us deliver our services. By using our services, you agree to our use of cookies.