This Loser Is You

Everything About Fiction You Never Wanted to Know.
(Redirected from You Suck)
Jump to navigation Jump to search 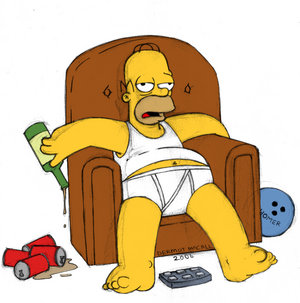 America, America, this is you.

You can't spell sympathetic without pathetic!

In many shows, particularly comedies and children's programs, The Protagonist is an ugly, incompetent, lazy, and near illiterate ditz. This is supposedly to allow the audience (ie, you) to identify with the protagonist. Ergo, the loser protagonist is you. This also allows for more room for Character Development, a lot of Character Development... or none at all. This also makes it easier for writers to come up with the plot of the week.

An alternate theory is that the protagonist is made so dumb so that you feel superior to him, no matter how dumb you are. Both of these could be true at the same time.

Note that this same person's friends are all clever, athletic, highly competent and, above all, cool. Why such an implausible situation? It's because, while the protagonist sucks just like you, at least he has friends that are just the kind of people you wish you knew. Which is supposed to make you identify with him even more. At least, that's what the network executives seem to think. As far as they're concerned, Viewers are Morons.

The opposite of This Loser Is You is the classically flawless Mary Sue (although it is compatible with Mary Sue via Anti-Sue), or her Good Twin the Escapist Character.

Paradoxically, applying This Loser Is You too accurately or too inaccurately can make the fandom riot to a far greater degree than anything you actually put in the storyline. After all, no one likes it when you imply (or outright state) that he's a loser.

Could lead to Fridge Logic when the protagonist wins and the enemies don't suck. An extreme and rather cynical version is Humans Are Morons.

See also I Just Want to Be Special when the character tries to change.

In short, this is where the Every Man character or Audience Surrogate is a "typical" loser like half the audience is imagined to be. This is usually intended to make them endearing. A sub trope is Loser Protagonist

Note: If you see any mis-potholes to You Suck (which now redirects to here), please remove them. This isn't about, say, a work outright saying that the audience or viewer sucks. Also, this trope is not about hostility toward the audience. For that, see You Bastard, Viewers are Morons and/or Take That, Audience!. Also is rarely Justified Trope with a "The Reason You Suck" Speech, despite what you might think.

Examples of This Loser Is You include:

Retrieved from "https://allthetropes.org/w/index.php?title=This_Loser_Is_You&oldid=1934436"
Categories:
Cookies help us deliver our services. By using our services, you agree to our use of cookies.