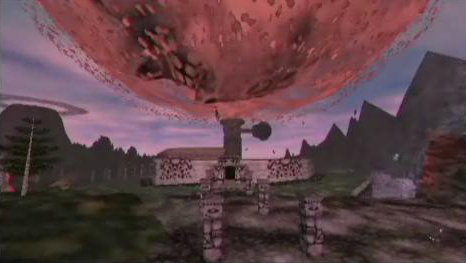 This is what happens when you let the moon listen to too much of 2Pac's Fuck Da World.

In most games, players see the dreaded Game Over screen when their in-game avatars are defeated in some way. Maybe they took too many wounds and lost all their Hit Points, or maybe they fell down too many Bottomless Pits and lost all their lives. They could have failed an objective or lost a critical NPC. They might have forgotten to pause the game while reading the walkthrough they pulled from GameFAQs and the game's timer ran out—you get the idea. These are all standard failings, usually treated with a simple, default message: "Game Over."

But, there are a few games that give special punishments to particularly noteworthy player screw-ups. These are Nonstandard Game Overs.

There are a few variations on this theme:

This page is about the unusual, context-sensitive methods by which players trigger a Game Over screen. It doesn't include the times when the game tries to trick you into thinking that the game has ended.

For standard Game Overs that result from an instant-kill attack, see One-Hit Kill.

Examples of Nonstandard Game Over include:
Retrieved from "https://allthetropes.org/w/index.php?title=Nonstandard_Game_Over&oldid=1966968"
Categories:
Cookies help us deliver our services. By using our services, you agree to our use of cookies.