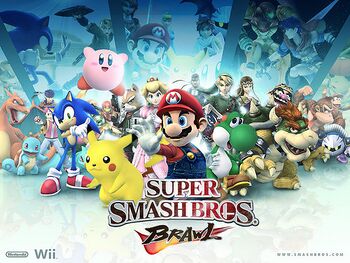 This isn't even all of the characters.

Super Smash Bros.', also known in Japan as Dairantō Smash Brothers, is Nintendo's very own Massive Multiplayer Crossover Fighting Game/Platformer with a twist. Remember all those times when, as a kid, you put all your Transformers and G.I. Joe and Masters of the Universe toys together and made them fight (and you know you did)? Super Smash Bros takes that idea and runs with it.

It features characters from Nintendo's large stable of games, from Mario and Pikachu to Link and Samus Aran, face off in a four-player fight to the finish.

Unlike other games, however, the Super Smash Bros. series doesn't leave it at that. Several stages have platforms, bringing the carnage to multiple levels, while others have native dangers, such as rising acid and random airstrikes. In addition, various weapons will appear randomly on the field, from barrels and hammers from Donkey Kong, to beam swords (which look suspiciously like lightsabers), Super Stars, the old SNES Super Scope, and even Poké Balls, which of course, release Pokémon to help you out. Instead of simply trying to inflict damage, players are instead attempting to knock opponents off the stage, forcing them off the sides, or just smacking them harder and harder, until they eventually go sailing off as A Twinkle in the Sky.

The first game, released for the Nintendo 64 in 1999, is rightly regarded as one of the best games ever for the system. The Sequel, Super Smash Bros. Melee, was released for the GameCube in 2001, featured even more characters, such as the oft-rescued princesses Zelda and Peach opposite their oft-kidnappers Bowser and Ganondorf; it also included a side-scrolling Adventure Mode and collectible trophies. Two hidden characters in the game, Marth and Roy from the Fire Emblem series - that until then was only released in Japan - led to that series getting a much larger worldwide audience and release, becoming another of Nintendo's flagship series.

The third game in the series, Super Smash Bros. Brawl, was released in 2008 for the Wii: it introduces Final Smashes, brings back the long-absent Pit from Kid Icarus, and even features third-party characters from outside Nintendo's stable - in this case, Sonic the Hedgehog and Solid Snake of Metal Gear, the former fulfilling a nearly two-decade-old fanboy dream. (The latter was because of a request by Hideo Kojima.) Not to mention, the game now has an actual story: The Subspace Emissary tells of a world in which the characters (as implied in Melee) are trophies that come to life and fight each other, until the Subspace Army appears and tries to take the entire world for themselves by transporting it, piece by piece, into Subspace. The characters team up with each other and battle through worlds inspired by Nintendo games while trying to stop the Subspace Army.

A fourth installment for the 3DS and the Wii U has been released in 2014. Titled Super Smash Bros. for Nintendo 3DS/Wii U - and also (colloquially and collectively) referred to as Super Smash Bros. 4 - these installments added all sorts of other modes and perks. It includes more detailed character customization, replaces Subspace Emissary with Smash Run - a Metroidvania-style roadgame with enemies from all sorts of franchises - and Smash Tour, which incorporates light party game elements with a series of challenges undergone by the players. This was the first Smash game to have DLC, with the final DLC character even being the winner of an official Nintendo-sponsored Smash Ballot.

The fifth installment, Super Smash Bros. Ultimate, has been released for the Nintendo Switch on December 7, 2018. It features all characters from past Smash games while also adding few newcomers and the concept of Echo Fighters, which are this game's term for "clones" (think Lucina as Marth's alt instead of taking her own character slot). It also features a multitude of stages from past Smash games as well as a few new ones. All stages have the Final Destination-esque Ω form introduced in the previous installment as well as a brand new form that makes them look more like the Battlefield stage. Notably, this game does away with Trophies, replacing them with Spirits. Related to this, this game's Adventure mode is called World of Light which explains their presence and there is a special mode called Spirit Board. Both modes allow players to battle various opponents with special rules to collect Spirits.

This game pretty much kicked off the Mascot Fighter sub-genre in one go.

And by contesting, and by fighting fiercely/Surely our splendor grows.

Retrieved from "https://allthetropes.org/w/index.php?title=Super_Smash_Bros.&oldid=1963368"
Categories:
Cookies help us deliver our services. By using our services, you agree to our use of cookies.