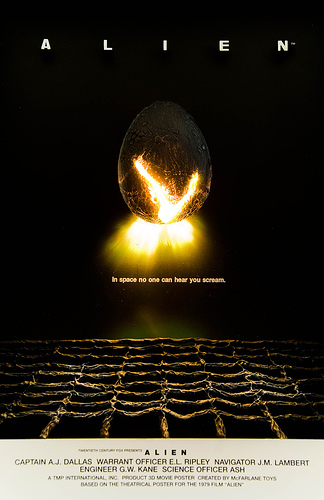 If you were redirected and wanted other, typically nicer kinds of aliens, see Alien Tropes.

A multimedia franchise and the first to successfully combine science fiction with Body Horror and actually make it scary, instead of cheesy. The franchise spans several comic books, video games and foremost a tetralogy of films, each with a different visionary director and all starring Sigourney Weaver.

The first film Alien (1979) involves the crew of a freighter spaceship who stop to answer a Distress Call from an uncharted moon. One of the crew members (John Hurt) gets an alien organism attached to his face and goes into a coma. Days later, an alien embryo explodes from the crewman's chest and rapidly matures into a savage monster. As the alien stalks through the ship, the crew chooses to go against their company's orders and fight back. One by one, the crew members are slaughtered by the alien until only Ellen Ripley (Weaver) and the ship's cat are left. She manages to defeat the alien and goes into hypersleep to return home. Writer Dan O'Bannon based the film on a sequence from his previous film Dark Star, in which a beachball-shaped alien runs amok on a spaceship and tries to push an astronaut down an elevator shaft. Ridley Scott directed.

In Aliens (1986), Ripley wakes up from hypersleep nearly sixty years later on reaching Earth. Her former employers, the Weyland-Yutani company, refuse to believe her claims about the alien and revoke her licenses. Not long after the colony established by the Company as cover for their investigation of the crashed ship goes silent. The company sends a unit of elite Space Marines to investigate, along with Ripley, who reluctantly agrees to act as an adviser. At the colony, they discover a whole nest of aliens, along with an egg-laying alien queen. In the ensuing battle, nearly all the marines are killed. Ripley, one of the Marines, a colonist girl, and half of an android escape and enter hypersleep for the return home. The film was directed by James Cameron, who shifted the genre from horror to action. The film was a smash success and is considered one of the few film sequels to be as good as its predecessor. Of particular note was Ripley's ascension to one of cinema's most famous Action Girls. Sigourney Weaver even got a nomination for Best Actress for her role as Ellen Ripley in Aliens, one of the most shocking Oscar nominations in history, and Stan Winston won an Oscar for the design of the Alien Queen.

In Alien³ (1992), hypersleep goes on the fritz again and Ripley's ship crash lands on a prison planet, killing all occupants except her. Even worse, it turns out that Ripley's been infected with an alien egg by a stow-away Facehugger. Another Facehugger slips into the colony and infects a dog, which quickly gives birth to a quadrupedal alien. Most of the prisoners die before the dog-alien is destroyed. Ripley makes a Heroic Sacrifice and kills herself just as her own alien is hatching. Directed by David Fincher, this film introduced the concept of aliens having different shapes depending on their host bodies. The film was much less popular than the previous installments, provoking special anger from fans due to its Shoot the Shaggy Dog nature, and was expected to be the final episode due to the death of Ripley. This film is not merely called an "Alan Smithee film" by irate fans, but decades later is held up as one of the textbook examples of "problems behind the scenes": David Fincher himself is actually a masterful director, but the studio kept messing with his work, and the project went through a revolving door of different screenwriters. The production was so chaotic that multiple alternate cuts of the film exist, scenes that were actually filmed but then scrapped and replaced as revisions kept occurring late into filming.

Alien: Resurrection (1997) has Ripley cloned back to life on a military research station that is breeding aliens in yet another attempt to turn them into weapons. The alien DNA that melded with Ripley's has given her remarkable physical abilities and a connection to other aliens. Shortly after a crew of smugglers arrives with a fresh shipment of infected humans, the aliens break out of their pens and run amok. The new Ripley leads a rag-tag group of survivors against the aliens and their half-human, half-alien hybrid queen in an effort to prevent them from reaching Earth. The plot breaks the traditions of the series by not including the original Ripley nor the Weyland-Yutani company. The screenplay was written by Joss Whedon and the film directed by French auteur Jean Pierre Jeunet in his only Hollywood excursion. The film attempted a gorier, campier and thoroughly more bizarre style, which the studio fought. Ultimately, the film was not well received, though like all Alien films, it performed well at the box office. For those that would like to know the reason, Joss Whedon wrote it as a camp parody, while Jean Pierre Jeunet wanted horror, and for some reason, didn't throw Joss' script in a trash can.

In 2004, the Aliens got paired up with another cinematic space monster, the Predator, in Alien vs. Predator, loosely based on a Massive Multiplayer Crossover franchise of comic books, video games and novels dating back to 1993. The resulting film uses very little of the crossover source material, putting a team of modern-day scientists, soldiers and survivalists on an expedition to the Antarctic. There, they discover an ancient, high-tech ziggurat that Predators have used since time immemorial to hunt Aliens as a rite of passage. The team and a group of young Predators must fight the latest crop of Aliens and prevent them from escaping into the human population. Ultimately, a female mountain climber emerges as the heroine of the story, much like Ripley did in the original Alien. The film was considered a rather brainless, PG-13 action flick, but performed very well. Prometheus has made the AVP series Canon Discontinuity.

Its sequel Alien Vs Predator: Requiem (2007) picks up right after the previous film as the Predator spaceship is taking off. From the body of a slain Predator bursts an Alien-Predator hybrid called a "Predalien". The hybrid monster slaughters the other Predators aboard, causing the ship to crashland in the forests outside Gunnison, Colorado. With the Predators dead, the Predalien and several Facehuggers escape into the forest and begin to impregnate the local populace. The ship's distress signal summons a lone Predator to Earth with the intention of killing the Predalien and erasing all evidence of the Alien presence. Once again, human and Predator fight independent battles to defeat the Aliens. In the end, the film features the appearance of Ms. Yutani, the other half of the Weyland-Yutani company. The film is either much better than Alien vs. Predator or much worse, depending on whom you ask.

There is also a Dark Horse Comics series which began prior to the release of the third film and thus occupies an Alternate Continuity. The comics continue onward from the end of Aliens and focus primarily on an older Newt and Hicks, continuing the story directly for three volumes before dividing into a number of self-contained spinoff stories.

Lastly, there have been several tie-in novels from the Alan Dean Foster novelizations of the movie to adaptations of the comic books.

A prequel to Alien directed by Ridley Scott, Prometheus, was released in 2012. It is Scott's first foray back into the Alien franchise in particular and science-fiction in general since the release of Blade Runner.

Alien (franchise) is the Trope Codifier for:
The following tropes are common to many or all entries in the Alien (franchise) franchise.
For tropes specific to individual installments, visit their respective work pages.

Retrieved from "https://allthetropes.org/w/index.php?title=Alien_(franchise)&oldid=1921773"
Categories:
Cookies help us deliver our services. By using our services, you agree to our use of cookies.