Everything About Fiction You Never Wanted to Know.
(Redirected from Scrappy Level)
Jump to navigation Jump to search 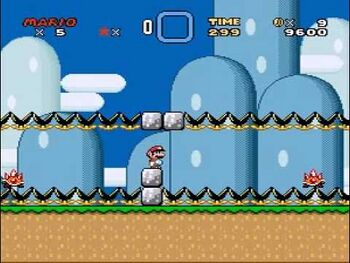 The blocks look safe, but they're probably programmed to give Mario radiation poisoning or something.

There are times in video games where, instead of a boss becoming infamous for being insanely difficult, a level does. It could be that it is infested with Goddamned Bats (or Demonic Spiders), is really long and has no check points, is home to That One Boss, is home to That One Puzzle (or at least one with a Guide Dang It), has you trying to outrun an Advancing Wall of Doom or otherwise sticks you with auto scrolling, has a Scrappy Mechanic in play or is The Maze level. In an MMORPG, another possibility is that the level is far too far away from everywhere else, making trips to it pointless. If you experience frustration and anger at a level that may have one or more of these symptoms, congratulations: you're playing That One Level.

Sometimes That One Level polarizes the playerbase—a portion of players find it infuriatingly hard while others don't have much of a problem with it. This can be a matter of general skill, familiarity with a particular control scheme or just plain luck, depending on the level. Regardless, about the least helpful thing that can be said about one of these is "I never had any trouble with it" or worse, "I got through that on the first try," especially without any helpful information included.

Although it isn't a necessary requirement, it should be noted that many That One Levels are hard on all difficulty settings. If a level is difficult on the most difficult setting, it's to be expected. That One Level is the one which is just as infuriating on easy as it is on Harder Than Hard.

Most, if not all Bonus Dungeons (although you don't have to do them), Slippy Slidey Ice Worlds, and Down the Drain-esque stages qualify as That One Level. Can sometimes contrast the Crowning Levels Of Awesome. It Gets Better is, in many cases, when the beginning of a game has these.

Examples of That One Level include:

Because there are so many of Those Levels, they've been categorized by genre for your viewing convenience:

Retrieved from "https://allthetropes.org/w/index.php?title=That_One_Level&oldid=1960878"
Categories:
Cookies help us deliver our services. By using our services, you agree to our use of cookies.