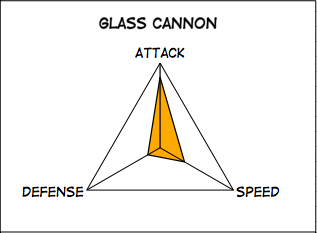 "Nuke the site from orbit. It's the only way to be sure."

In short: He can dish it out, but he can't take it. Similar to (but distinct from) the Fragile Speedster, the Glass Cannon is characterized by insane attack power coupled with pathetic defensive ability.

Prevalent in RPGs and Fighting Games, as the cast needs to be big enough that "takes hits like a chump" becomes a viable character trait. In RPGs, the Glass Cannon tends to be a Squishy Wizard. Artillery units in Real Time Strategy and Turn-Based Strategy games also tend to have this trait, as they're meant to be far away from combat, or at least in the back of the formation.

Make the Glass Cannon incapable of taking any punishment at all and you've got a One-Hit-Point Wonder. Glass Cannons often overlap with the Fragile Speedster; characters of that type, who put out high damage and dodge most incoming attacks, but go down quickly if they do get hit, are sometimes called "Glass Ninja." Another type of very common Glass Cannon would be an offensively oriented nuker, such as the Squishy Wizard, who is basically like a living artillery piece. Character-wise, The Berserker might also become a Glass Cannon, even if he's not inherently frail, but just doesn't bother whatsoever about defending himself tactically.

Contrast Stone Wall who takes it but can't dish it out, as well as Mighty Glacier, who can dish out and still take it like a man but at the expense of speed, and finally Lightning Bruiser, who can do the same without sacrificing anything. See also: Competitive Balance and PVP-Balanced.

When adding an example, think, "If this character were to go against him/her/itself, how long would the fight last?". Not very long - offensive power has to outstrip defensive ability. If the character is just fragile, but not that powerful offensively, or vice versa, it's not this trope.

Also, hit-points vs resources spent is not factored into this trope; if the combatant deals fearsome damage, and still has a decent amount of Hit Points, but is costly to balance it out, then this is more a Mighty Glacier than a Glass Cannon. The character must have relatively sub par health AND fearsome destructive capability, excluding cost factor.

Not to be confused with cannons that launch glass projectiles.

Examples of Glass Cannon are listed on these subpages:
Retrieved from "https://allthetropes.org/w/index.php?title=Glass_Cannon&oldid=1625093"
Categories:
Cookies help us deliver our services. By using our services, you agree to our use of cookies.