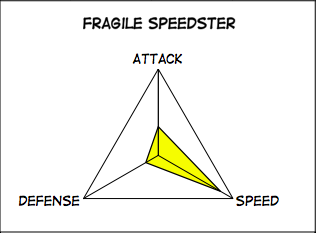 Sure they're fragile, but it's the razor sharp edges you need to watch out for.

One of the classic video game character builds, along with the Mighty Glacier, Stone Wall and the Jack of All Stats.

The name about sums it up: the Fragile Speedster is fast. If you blink, he's not there anymore. He appears, strikes, and vanishes in the blink of an eye. Nine times out of ten, his occupation is a thief or a Ninja.

Still, being fast has its downsides—what you gain in mobility, you lose in durability. After all, it's hard to keep up that kind of speed when a heavy suit of armor is weighing you down. As a result, the Fragile Speedster is often forced to rely on dodging abilities to avoid getting struck in the first place, and if he does take a hit, down he goes. The racing variant tends give lighter vehicles high acceleration and maneuverability but low top speed.

Though exaggerated in fiction, this trope has some basis in Real Life. Armor is heavy.

A form of Competitive Balance. Contrast Mighty Glacier, who sacrifices speed for strength and durability, as well as Lightning Bruiser, who is fast without any loss to strength or durability.

Examples of Fragile Speedster include:

When targeted by enemy fire, most pilots begin to manuever, twist and turn, and launch a volley of countermeasures to avoid the incoming projectiles; the Blackbird pilots instead responded by simply accelearting to a point that no aircraft could catch them, no shell could strike them, and no missile could go fast enough to challenge them. Having an especially low (for the time) radar cross section was just overkill. Of course, being an unarmed strategic scout that was not weighed down by weapons helped—it was built to do nothing but fly fast and take pictures,[2] which meant it could specialize in its roles quite well.

Retrieved from "https://allthetropes.org/w/index.php?title=Fragile_Speedster&oldid=1903271"
Categories:
Cookies help us deliver our services. By using our services, you agree to our use of cookies.