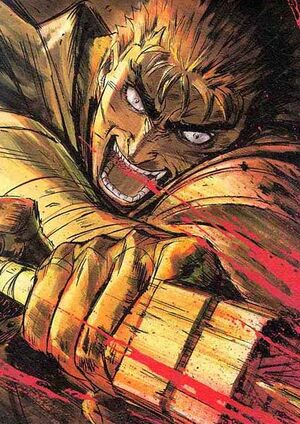 Yet another futile attempt by Guts to engage in a civil conversation.

The Berserker is a character who throws himself into a fight with such reckless abandon, it seems like he WANTS to die. It could be over-enthusiasm, overconfidence, Unstoppable Rage, or a real lack of will to live. Whatever the cause, it's usually accompanied by a bellowing warcry. Sometimes with total obliviousness to whether he's actually fighting the enemy. And he never, ever retreats.

Berserkers are equally capable of being good or evil. If they're good, then out of battle, most will brood about whatever it is that causes their berserk fits, or show remorse about losing control of themselves. Most end up one of two ways: being taught by their teammates to control themselves after a particularly close call, or dying in a dramatic fashion while lamenting that they died without completing their mission. Good Berserkers are also very prone to Heroic Sacrifices, for very obvious reasons. An evil Berserker, on the other hand, is generally just unrepentantly Ax Crazy and very often Chaotic Evil.

The trope's title refers to the berserkr of Viking-age Scandinavia: Warriors who are said to have thrown themselves into battle wearing only animal hides for armour and with no regard for their own safety. Their 'battle-madness', whose exact nature is presently unknown (some say it came from eating poisonous mushrooms before a battle) is said to have been a gift from Odin. The word "berserkr" means "Bear-shirt" in Old Norse, referring to either going into battle "bare-shirted" or for wearing bear pelts into battle. Their effectiveness in battle is up for debate, but they were an imposing and terrifying nightmare to the continental Europeans—and, if The Icelandic Sagas are to be trusted, to their own civilization.

Berserkers that truly do wish to die in battle are better known as Death Seekers—those who don't often overlap with the Blood Knight or Barbarian Hero instead. When foolishly done without any regard to strategy or planning, the Berserker becomes a Leeroy Jenkins.

Examples of The Berserker include:

Retrieved from "https://allthetropes.org/w/index.php?title=The_Berserker&oldid=1939014"
Categories:
Cookies help us deliver our services. By using our services, you agree to our use of cookies.