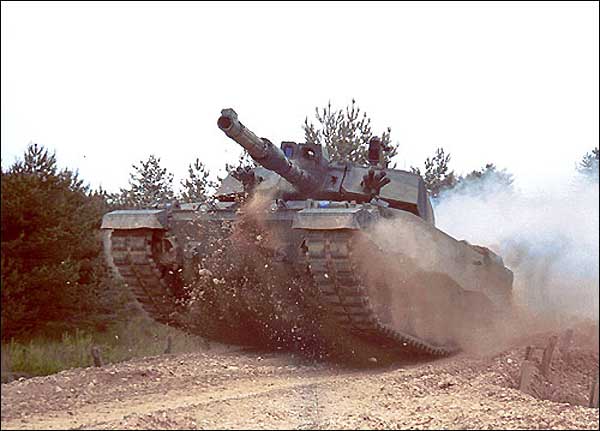 A tank so fast, it's doing a wheelie (just not technically on wheels).

There's the Fragile Speedster; lightning fast, but weak as a kitten. Then there's the Glass Cannon who can dish it out but can't take it, as well as his spell-based cousin the Squishy Wizard. But then there's the Mighty Glacier, a strong but slow behemoth that can take and deal a LOT, but can't dish it out fast enough. Then there's the Stone Wall, who can take even more but can't dish out or move well either, and then there's the Jack of All Stats, who can do all of these, but not to the degree the others are able to, as well as the Master of None who plain fails at everything, and even more so the Joke Character. All of these are very common character tropes from years back.

This kind of character is often a subversion of the Mighty Glacier or the Fragile Speedster: The hulking Big Guy you'd taken for a Mighty Glacier turns out to have lightning speed on top of his Stone Wall levels of defense, or the lean-looking Lancer you'd for sure pegged as a Fragile Speedster can take damage as well as dish it out! This could be said to be the ultimate Jack of All Stats; truly a force to be reckoned with in any medium.

You're more likely to come across such characters as boss characters. When playable, the Lightning Bruiser will often either be a secret Purposefully Overpowered Game Breaker, or be balanced by having other weaknesses, such as a total lack of range, magical capability, or a high resource cost (in games where such things exist).

A Lightning Bruiser may also perform Confusion Fu. (If he's good at everything, then he can throw everything at you, right?) May also be a Flying Brick. Compare and contrast Acrofatic, Muscles Are Meaningless.

The appearance of a Lightning Bruiser opponent in a story that used to obey the conventional character types is often a sign of entering the next level of the Sorting Algorithm of Evil.

For sorting examples amongst the categories below, what must be taken in account are expectations. If a character is obviously strong and resistant, but his nimbleness comes off as a surprise, then he's a Fast-moving Big Bruiser. If speed is to be expected, but you tend to forget about how devastating his attacks can be or how much he can take, then he's a Hard-hitting Speedster. Machines have their own subsection. If he doesn't come off as a subversion and isn't a Machine, put them in the unsorted category.

Examples of Lightning Bruiser include:

Oh, now I see the wheels!

Retrieved from "https://allthetropes.org/w/index.php?title=Lightning_Bruiser&oldid=1967179"
Categories:
Cookies help us deliver our services. By using our services, you agree to our use of cookies.