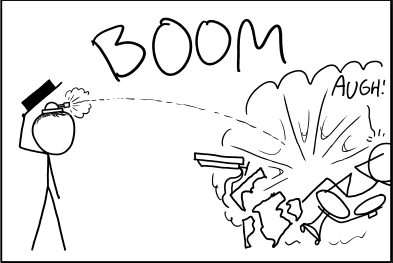 Headcanon accepted!
— Way too many fans in Tumblr

Headcanon (also seen as "head canon") is an interpretation of events or elements of a Fandom, used to provide a personal explanation or enhancement of Canon elements, but not found within or supported by the official canon. Differs from Fanon in that it is not an accidental fan mutation of the core work, but a deliberate act of enhancing or supplementing canon for one's personal satisfaction, usually shared in a context that makes its non-canon status clear. It also differs from Fanon on the collectivity of its use: a headcanon is usually linked or traced to a single particular person who originated it, while fanon tends to be more of a "collective" creation by fans, sometime traceable to a single point of origin but usually memetically mutated to its current form; thus, a headcanon can become fanon if enough fandom members embrace and propagate it.

Like other fan-generated content, a headcanon can become Ascended and turn into canon if the work's creator likes and approves it.

Note that a phrase like "personal headcanon" is redundant -- all headcanon is personal.

Knowyourmeme.com has traced "headcanon" back to a July 2007 LiveJournal post, where a Fanfic author used the term, possibly coining it, to describe her interpretation of a character from Ben 10. By 2008 the term was in use in multiple fandoms across LiveJournal. It was first spotted outside LiveJournal in 2009, and within months had spread across the web as a standard usage. It consequently spawned the meme "Headcanon accepted" (with corresponding Image Macros).

Not to be confused with headcannon, no matter what xkcd says.

Contrast with Canon Wank, which is similar but not nearly as good-natured, and backed by an obsessive need to prove that it is "really" what is going on. Given the obsessiveness of certain fans, it's not rare that a headcanon gets jumpstarted into canon wank.

No examples, please; this page is just to define the term.