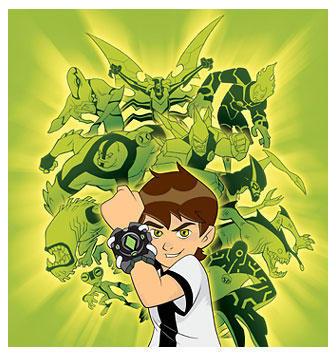 An action cartoon franchise from America; this entry covers the first series.

Ben 10 revolves around the adventures of Ben Tennyson, a 10-year-old boy. While on summer vacation with his grandpa Max and cousin Gwen, he comes into the possession of a mysterious alien device - the Omnitrix - that allows him to change into a multitude of alien heroes. At first, there are only 10 aliens (hence the name "Ben 10"), but more forms were eventually discovered.

Why isn't the device in more capable hands? Well, once it attached to Ben, it was stuck there. It won't come off.

There's more to this show than meets the eye, however. For example, while this and most other American cartoons either Never Say "Die" or push the Thou Shalt Not Kill Aesop, "people" in this show get killed with reckless abandon with hardly anyone batting an eye. The show's also infamous for the Kissing Cousins vibe between Ben and Gwen. Plus, it has plenty of Nightmare Fuel.

Movie-wise, this (the original series) has three based on it. A Live Action Adaptation Ben 10 Race Against Time (Notable for starring Lee Majors as Grandpa Max), a regularly animated hour long flick Secret of the Omnitrix and a (supposedly non-canon) all CGI film called Ben 10 Destroy All Aliens.

Not to be confused with the Bren Ten. Or Benten. Or Ben X.

Tropes used in Ben 10 include:
Retrieved from "https://allthetropes.org/w/index.php?title=Ben_10&oldid=1951519"
Categories:
Cookies help us deliver our services. By using our services, you agree to our use of cookies.