Everything About Fiction You Never Wanted to Know.
Jump to navigation Jump to search
/wiki/Hunter S. Thompsoncreator 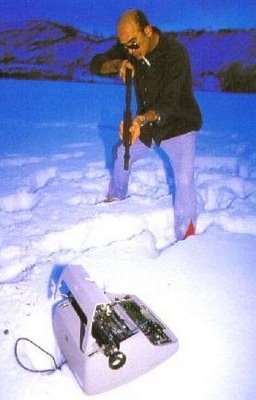 Hunter in one of his saner moments.

Hunter Stockton Thompson (1937-2005) was the living embodiment of the Sixties, as well as an American journalist and novelist. He is accredited with creating Gonzo Journalism, being one of the main reasons Rolling Stone Magazine lasted long enough to become an institution instead of folding early like many other such mags (there's a reason he's still on the masthead), and being one of the most scathing, conniving, and vicious political writers in recent history. Though he started out in sports writing and remained well-rooted in it up to his death, his political journalism is what he will be remembered for. Of course, he was quite able to meld the two, frequently including references to sports in his political writing, and vice versa; pro football, a passion he shared with self-declared Arch Enemy Richard Nixon, provided particularly fertile ground. His published bibliography, both pre-and-posthumous, consists of nearly twenty books (a number of which are collections of his journalism work and personal letters), the most famous being his first three: in order, Hell's Angels: A Strange And Terrible Saga, Fear and Loathing in Las Vegas: A Savage Journey to the Heart of the American Dream, and Fear And Loathing On The Campaign Trail '72. He was a larger-than-life figure given to shocking society into awareness of his points and who was convinced that the American Dream was dying around him. He was also one of the heaviest opponents of President Richard Nixon, and the founding author of Rolling Stone's National Affairs Desk. He committed suicide in 2005. He was cremated and - per his wishes - his ashes were shot out of a cannon of his own design and paid for by his close friend Johnny Depp.

Thompson, as a journalist and a reporter, was different because he put so much of himself into the work, both mentally and physically. His research for Hell's Angels, for example, began with him riding with a chapter of the infamous bike gang for a full year and concluded with him getting the shit kicked out of him by the same.

Thompson's infamous "Gonzo journalism" was created after he wrote a 1970 article on the Kentucky Derby, "The Kentucky Derby is Decadent and Depraved", and is notable for large amounts of stream-of-consciousness writing and also for being, as a rule, almost completely unedited. This is one of the reasons, according to Thompson, that his much-vaunted Fear and Loathing in Las Vegas novel is in fact one of the worst examples of Gonzo journalism he ever wrote (importance as a novel notwithstanding), because it was not published raw, although he himself said in the case of Fear and Loathing, editing was a necessary evil, since parts of the original, unedited novel were for all sakes and purposes, unpublishable. Even the edited version has a chapter in it that is nearly incomprehensible gibberish.

Possibly better-known than Thompson himself is his thinly-veiled alter-ego, Raoul Duke, who in addition to "starring" in Las Vegas occasionally made appearances in Rolling Stone heading the magazine's fictional Sports Desk. (Incidentally, Duke is also still listed on the Rolling Stone masthead, along with Thompson's longtime illustrator Ralph Steadman -- who is in turn credited as Gardening correspondent.)

He is remembered through two expies: Spider Jerusalem from Transmetropolitan and Duke from Doonesbury. He is also parodied by the character Hunter on The Venture Brothers

The Eulogy of the American Dream