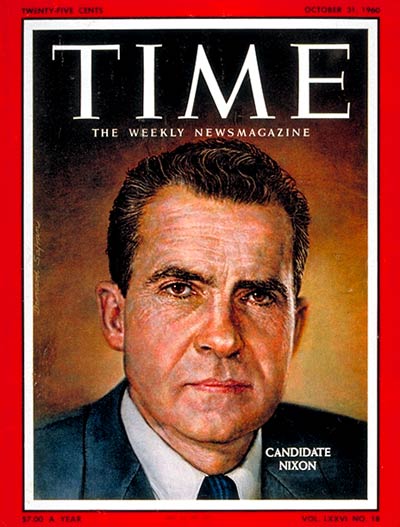 The thirty-seventh President of the United States, and probably the most hated former president in U.S. history before politics polarized in the early 2000s (only Herbert Hoover is competition), Richard Milhous Nixon remains the standard-bearer as being the embodiment of the corrupt president. If President Corrupt shows up in fiction, there will probably be allusions to this guy.

Nixon was raised in the Quaker faith (aka the pacifistic, egalitarian Society of Friends) and came from a very poor childhood (his father worked as a gas station attendant). Before becoming President he served as a naval commander during World War II, a US Congressman and then Senator from his home state of California, and Vice President under Dwight D. Eisenhower. Oh, and he had a dog named Checkers he was given as a gift that turned into a bribery scandal. Satirical portrayals of him in media initially focused on his perceived square-ishness, changing, as the Watergate scandal unraveled, to a focus on his lying and paranoia, eventually settling on sort of a general Designated Evil.

Before becoming President in 1969, Nixon had served as VP and ran in the 1960 election. His loss was in no small part due to the fact that this debate was the first one ever televised, and his haggard appearance cost him votes when contrasted with the handsome and charismatic John F. Kennedy.[1] The story goes that Nixon refused to allow the makeup people near him and that people on TV cameras without makeup look just awful; in later years, Nixon would seldom appear in public without a thick mask of makeup.

Toward the end of the '60s, he enacted his "Southern Strategy" to win over disaffected Dixiecrats (read: segregationists, despite Nixon himself being in favor of integration) to the Republicans, which played a large part in his election to the presidency and more or less set the Grand Old Party on its current course.

Nixon is, of course, most famous for his involvement in the Watergate scandal, which ultimately led to his resignation. The particulars of the scandal are as follows: the Commission to Re-Elect the President (CRP, after it was worked out that the original acronym spelled CREEP) used both illegal and morally questionable "ratfucking" methods throughout the '72 campaign to undermine competing campaigns. The break-in at the Democratic headquarters at Watergate to wiretap their phones was the culmination of these efforts, but unlike previous actions, the criminals were caught.

This, it must be noted, was merely the culmination. Every president (except for James K. Polk) wants a second term, but Nixon, with his lifelong persecution-mania, was more obsessed with it than any of his predecessors, and he passed this obsession along to his subordinates. Throughout Nixon's first term, CREEP had been working to secure the 1972 election for Nixon by scuttling the campaign of every potential Democratic nominee except George McGovern, who was judged easiest to beat. They succeeded. You can read that story in Nixonland: The Rise of a President and the Fracturing of America, by Rick Perlstein.

Things came to a head when Nixon sought to appoint L. Patrick Gray as the permanent head of the FBI. That meant that he had to undergo Senate approval, and during the hearings he eventually made it evident that there had been a cover up regarding the break-in and, more importantly, that two presidential aides had been directly involved. This directly contradicted the White House line that the Watergate robbers had largely acted alone. He also admitted that he had destroyed evidence, allegedly unrelated to Watergate. Unsurprisingly, he was not confirmed as director by the Senate.

A whole mess of events unfolded after this, including the resignation of several of Nixon's aides, the Saturday Night Massacre—In which Nixon fired Archibald Cox, the Special Prosecutor investigating Watergate, and his own Attorney General and Deputy Attorney General (both of whom refused to comply with his order) on the same night, and sparked a constitutional crisis—and the discovery of secret tapes which recorded conversations in the Oval Office, the latter of which would eventually lead to Nixon's downfall.

Nixon claimed that the tapes would absolve him of any guilt regarding the cover-up, but not only did one tape contain nothing less than a 18-and-half minute gap, clearly erased, but eventually a Smoking Gun tape was found, in which Nixon asks that 'for matters of national security', the FBI investigation on Watergate should be halted, tacitly admitting he had committed crimes and should thus be impeached. He resigned soon after (sparing him from impeachment), all political support having evaporated after the revelation.

The funny thing is, it's very likely that Nixon could have easily won the election without the use of dirty tricks, as he was quite a popular president and his opponent, George McGovern, ran a weak campaign (although, of course, since CRP had directly affected the Democratic primaries, and not in a nice way, it's arguable whether McGovern would have been the opponent had Nixon run things clean from the start). It's also ironically funny that, until Watergate, he was the most popular president since Washington, and if it weren't for 'gate and 'Nam...

The Watergate scandal gives us several of Nixon's trademarks, such as him saying "I am not a crook" (he did say that, but it was actually part of a larger speech and not a standalone sentence like it's usually shown), and making the V signs (ironically signifying victory) after he was forced to resign. Needless to say, this did wonders for his reputation. Nixon was also known for getting elected on the promise that he had a "secret plan" for ending The Vietnam War which turned out to be bombing North Vietnam until they agreed to a peace treaty and "Vietnamization" of the war, which meant requiring South Vietnam to provide more ground troops so Americans could leave. It didn't work out very well for South Vietnam, but did let America get out of the war. Eventually.

Which leads us to the one of the good things Nixon did - "opening up" China and the U.S.S.R. to the West. As noted in the pagequote, only Nixon (or a man of his reputation) could have done this. America was still in the shadow of the Red Scare of The Fifties, and paranoia about communism was rampant; a liberal leader trying to open diplomatic relations this way would have been denounced as a Communist sympathizer and laughed out of town. But Nixon was well-known for being the opposite of a Communist sympathizer; he first reached national prominence by helping McCarthy perpetrate the Red Scare. As such, he could travel to China and the Soviet Union and still be taken seriously. Even better, he used his trip to China to fan Soviet insecurities about a Chinese-American treaty, exploiting it into two summits with the Soviet Union which culminated in the SALT and Anti-Ballistic Missile Treaties being signed. These resulted in the first real limitations on nuclear weapons, helping scale back the Cold War.

He also called for comprehensive health insurance, and supported affirmative action, social security, signed OSHA into law, started up the Environmental Protection Agency, started the Drug Enforcement Administration and declared the War on Drugs (he was also pro-Civil Rights, though as noted he later downplayed that to score political points)... In short, Nixon managed to expand the role and size of government more than any other president since Roosevelt. It's not for nothing that Noam Chomsky called Nixon "in many respects the last liberal president." People who remember these things tend to think of them as bad things. People who'd like to remember him fondly also like to gloss over these accomplishments. At this point, it is worth stating that Ted Kennedy once said that the worst mistake of his political career was rejecting Nixon's offer of universal health care in return for Democratic support.

After his resignation, Nixon was followed by his second vice president (after Spiro Agnew resigned), Gerald Ford. That president gave his predecessor a full pardon to the frustration of much of the American public who had to be satisfied with interviewer David Frost worming a partial confession out of Nixon in a series of exclusive TV interviews in 1977.

Nixon spent the rest of his years with speaking engagements, writing books, and traveling around the world to meet foreign leaders. He gained some respect as an elder statesman, and gave Ronald Reagan advice on the Soviet Union. He died after suffering a stroke in 1994.

Nixon has long been a subject of particular interest for presidential historians, and serves as the canonical example of a deeply conflicted leader who "could be considered both a failure and great or near great" (Alan Brinkley). Thanks to his particular brand of paranoid neuroses (his tapes include lengthy rants about people—mainly part of the 'liberal east-coast establishment' -- plotting against him), he's also been quite the fertile figure of study for psychologists.

Richard Nixon is the Trope Namer for:
Other tropes Nixon has given us are:
Nixon in fiction:

Retrieved from "https://allthetropes.org/w/index.php?title=Richard_Nixon&oldid=1868914"
Categories:
Cookies help us deliver our services. By using our services, you agree to our use of cookies.