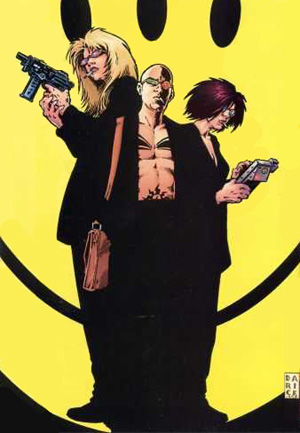 Transmetropolitan is a Cyberpunk Graphic Novel series by Warren Ellis and Darick Robertson, originally published from 1997 to 2002. It's a wild mix of gonzo journalism, American politics and the weird future. Although much of its focus is on surreal comedy, the books ultimately tell a heartwrenching story of one nation's politics swirling the drain in every possible way.

Well-known outlaw journalist Spider Jerusalem (basically, Hunter S. Thompson IN THE FUTURE!) begins the series "up a goddamn mountain", free from the constraints of dirty politics, toxic culture and his book deal. Until one day, his old publisher ("The Whorehopper") calls him up, reminding Spider that he still has two more books to turn out. Spider very reluctantly moves back to The City, a bastardized future version of New York City. He manages to get his old job back, and ends up picking up two "filthy assistants": first Channon Yarrow, his stripper-student-turned-nun-turned-bodyguard, and then Yelena Rossini, his editor's niece. For a while, he wreaks havoc upon The City with a keyboard and a bowel disruptor.

It's only when Spider gets truly involved in politics that things start to get serious. He can't wait to get the current president, nicknamed "The Beast", out of office, and to usher his competitor, Gary Callahan, a.k.a. "The Smiler", into office. When it turns out that Callahan's willing to get his hands very dirty to become president, Spider realizes just what a monster he's released... and sets out to bring the entire government crashing down.