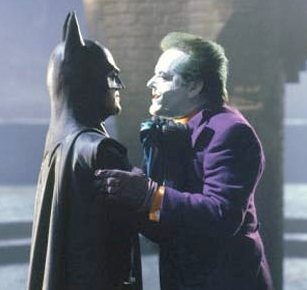 An archenemy, archfoe, archnemesis, or simply nemesis is some character's designated and most important enemy.

The Arch Enemy can be the Big Bad, The Dragon, The Rival, a Worthy Opponent, an Evil Counterpart, or even a Harmless Villain. The essential element is that, with them, It's Personal. Most typically, the Arch Enemy is a Foil of some sort. For example, the archenemy of the physically strong could be very smart.

The Arch Enemy will stand out from the Superhero's Rogues Gallery—there will be one opponent where the relationship to the hero and the motivations for battling them are more potent. These feelings may be one-sided, felt more by the villain than the hero.

A hero's archenemy is not necessarily the biggest threat to them. Lex Luthor is considered Superman's archenemy; Brainiac is smarter and Darkseid is vastly more powerful and dangerous, but for Lex - and, to a lesser extent, for Superman - it's personal between them.

A hero may possess more than one archenemy if more than one villain from his Rogues Gallery stand out, or if a former Arch Enemy dies and new one comes in to the picture. As an example, consider Spider-Man: the Green Goblin, Doctor Octopus, and Venom have all established themselves as recurring and iconic foes of Spider-Man, each of whom has been considered the wallcrawler's Arch Enemy at different points in time.

Lastly, remember that this generally refers to the enemy The Hero considers to be his Arch Enemy, and ideally, it should be personal on both sides (though there are plenty of good "But for Me It Was Tuesday"-type Arch Foes out there). Especially in the case of a Rogues Gallery, The Hero is usually considered an Arch Enemy to all of his villains, but he doesn't treat all of them as such. Electro, Rhino, Scorpion, and others all consider Spider-Man their most hated foe, but compared to the Goblin, Venom, or Doc Ock, Spidey regards these guys more like superpowered nuisances. Also, remember that being the Big Bad does not automatically make a villain the hero's arch enemy.

See also Breakout Villain, for those instances when a run-of-the-mill villain ascends to Arch Enemy status.

The Arch Enemy is more prone to certain tropes than the common villain:

Examples of Arch Enemy include:

Retrieved from "https://allthetropes.org/w/index.php?title=Arch_Enemy&oldid=1967221"
Categories:
Cookies help us deliver our services. By using our services, you agree to our use of cookies.