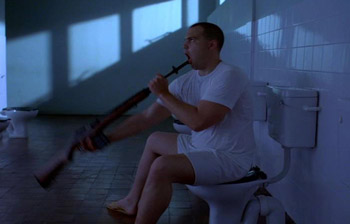 There are lots of ways to do yourself in: jump off a bridge, hanging, stick your head in the oven. One popular method in Hollywood is to wrap your lips around the barrel of your favorite firearm, and pull the trigger. One obvious reason for this; not a lot of room for error. Of course, some people still screw it up. Whatever you do, don't type "failed shotgun suicide" into Google Images. Someone who wants to give you the chance to do this will Leave Behind a Pistol.

If you came here looking at this as a way to off yourself, we highly recommend you get help. Please, put the gun down, and talk to somebody.

Examples of Ate His Gun include:

You would be amazed at how many people manage to botch this procedure.

"Did you ever hear the story of 'Reading Ron eats a gun'?!"

"With a flash like the sun, his lips are unwrapped from the barrel of his gun..."

You'll never get used to the taste of a gun.

When I finish this bottle, my old friend, Mossberg (a brand of gun), will be turning one last body into fertilizer.