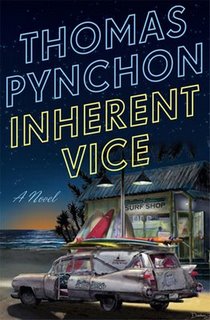 Inherent Vice is a 2009 novel by Thomas Pynchon. Ostensibly it follows Doc Sportello, a private investigator in California trying to find a missing real estate developer on the behest of his ex-girlfriend but really the work explores a much wider set of themes including the sex, drugs and rock and roll lifestyle of the '60s and its clashes with forces of law and order with a neo-noir sensibility.

The novel was adapted into a film in 2014 by Paul Thomas Anderson.

Tropes used in Inherent Vice include:

Retrieved from "https://allthetropes.org/w/index.php?title=Inherent_Vice&oldid=1678718"
Categories:
Cookies help us deliver our services. By using our services, you agree to our use of cookies.