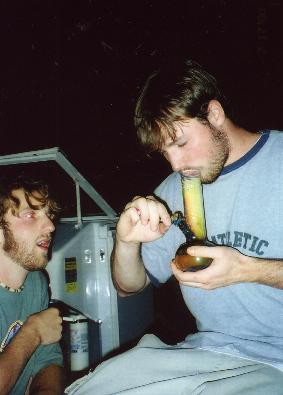 It's not the photographer's fault that the guy on the left has red eyes...

The male version of the Granola Girl. The Stoner is generally a comical character who smokes, gets beat up, makes bad jokes, and suffers other sorts of Butt Monkey type things, only with more drugs. The most likely character to get a Mushroom Samba bit. He is basically a cross between Butt Monkey and the Wacky Guy. Usually somewhere between a technical and a Badass Pacifist, and almost always entirely non-threatening, in physical appearance. May very occasionally be prone to getting dangerous, but only rarely and under truly exceptional circumstances.

The Stoner is very similar to the 19th Century "funny drunk." However, that became a Discredited Trope as groups like AA and MADD gained influence. The modern stereotype is that drunks are likely to beat you up, while stoners aren't, so stoners make better comedy.

May evolve into an Erudite Stoner. If he should try to reform[1] he'll find Cold Turkeys Are Everywhere, both real and hallucinatory.

See also: The Slacker
Examples of The Stoner include:

Retrieved from "https://allthetropes.org/w/index.php?title=The_Stoner&oldid=1644042"
Categories:
Cookies help us deliver our services. By using our services, you agree to our use of cookies.