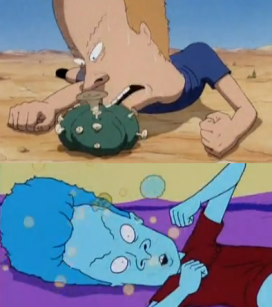 "Butt-head, I think I'm freaking out."

Implied or accidental use of mind-altering substances by characters, but notably by the protagonists (villains, of course, can do anything). Usually very obvious to the attentive audience but may have to get around the censors under a different/invented name or by making the usage involuntary. Sometimes, the hallucinations are passed off as a side-effect of overconsumption of an otherwise legal and legitimate foodstuff such as sugar, ice cream, chocolate, or steak sauce.

What makes this trope generally different from Intoxication Ensues is the hallucinations and the person in question is otherwise acting normally. To them, the hallucinations are either commonplace or a mere curiosity. The narrative might jump back and forth between the hallucination and the real world to show they are holding a normal, intelligent conversation with a plant. Typically great comedic fodder with a believable setup on network television, but safer to do on cable. If it's animated, expect those affected to Open the Iris.

If it doesn't contain An Aesop about the dangers of drug abuse with Anvilicious subtlety, it tends to just show off a character's carelessness.

May involve a G-Rated Drug. See also Acid Reflux Nightmare for a food-related version. Sometimes leads to a Disney Acid Sequence. If it's a whole group of people experiencing it simultaneously, it's Everybody Must Get Stoned. See also Through the Eyes of Madness.

No Fanon, please! If it doesn't explicitly involve hallucinations caused by substances, don't reinterpret it as if Everyone Is Ringo On LSD.

Examples of Mushroom Samba include:

Retrieved from "https://allthetropes.org/w/index.php?title=Mushroom_Samba&oldid=1639153"
Categories:
Cookies help us deliver our services. By using our services, you agree to our use of cookies.