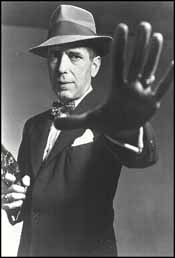 A Seeker character frequently used in Detective Drama. A professional detective not directly affiliated with a police department in any official sense (although many will have contacts in the department, and it's not uncommon for members of this profession to have been either police officers or previously worked in law-enforcement, as many of the skill sets overlap), a Private Detective takes on cases that private citizens bring to them - however, whilst they aren't supposed to investigate crimes (which are official matters for the police, who often look dimly upon private detectives sticking their noses in - both in fiction and in real life), they usually find themselves knee-deep in murders, robberies and kidnappings by the end of the story. They may be doing this because the Police Are Useless and/or unconcerned about solving the case, meaning our detective is the only person who is actually willing or capable of solving it.

Although it's more common for a Private Detective these days to be treated as just one step away from the Amateur Sleuth (or often, particularly if seen from the point of view of the police, as rather sleazy bottom-feeders usually involved in some kind of criminal activity and frequently ex-cops kicked off the force for some kind of corruption), the classic Archetype of the Private Detective - and the one that has generally stuck in the mind of people when they think of the profession - is either the Great Detective or the Hardboiled Detective.

While the comparison with the Amateur Sleuth is common, in many ways the stories work the opposite ways. The Amateur Sleuth, such as Miss Marple, tend to cozy locked room mysteries, where everything starts complicated and uncertain, but slowly works its way down as a logic puzzle, with a tidy solution where the killer is unmasked. The Private Investigator tends to start simple, but as the investigation will unravel an ever more complicated plot, and the ending is rarely tidy. The killer may be unmasked, but larger problems tend to stay unsolved.

Vampire Detective Series often feature one as a protagonist, though of the immortal variant.

Examples of Private Detective include: