All The Tropes:Just a Face and a Caption

Everything About Fiction You Never Wanted to Know.
(Redirected from Just a Face and a Caption)
Jump to navigation Jump to search 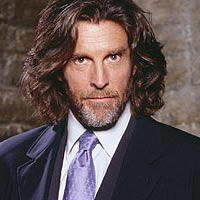 There are some fans of some show who know who he is and why you should care.[1]

Images in Wiki Pages are great, aren't they? They make the page more visually appealing and let us display a really cool example, often in a funnier and more imaginative way than by words alone. Why, we love images so much that we have the Image Links subpage type so each page can have more than one. However, you don't need that, for you've found the perfect example for the trope and thought of just the wittiest caption to go with it.

Well, stop and think. You might be putting up Just a Face and a Caption.

A common sin of contributors is to let their Fan Myopia get the best of them and put in a pic that just shows off one of their favorite characters with a caption that makes a joke off of how they so totally fit the trope in their show. This will rarely, if ever, do a good job of showing off the trope. Nobody who isn't a fan of the show will get who this character is or how they fit the trope and the caption just won't be funny to them. The point of the page image is to provide a quick, sharp visual illustration of the trope for everyone.

Of course, a trope about purely visual tropes, like faces, facial expressions, hairstyles, and such are a different matter. It can be acceptable for certain character archetypes as well, depending on the picture itself.

Remember, There Is No Such Thing as Notability, and so there is no show that you can assume that all of the readers will know about. You certainly shouldn't assume such a thing from the examples you read around the site. No matter how good their Entry Pimping is, the editors can't get past the fact that they are only 1% of the total readership. This ratio has been stable for some number of years, and is generally true of all wikis.

Our readers come from all sorts of fandom and will connect with examples from different media. That's why we have the different media -- to get people from all fandoms, not just to read but also to contribute. We want it all, from Web Comics to Wagner. So, images shouldn't be added under the assumption that people are already in the fandom, they must be added to get people to get involved in it. If we give the impression we're not interested in a person's subject area (or are much more interested in another area), we are limiting our subject coverage. Along that pathway is utter niche-dom.

See also How to Pick A Good Image.

While Just a Face and a Caption has elements in common with Examples Need Context, it isn't the same issue.

There is one and only one exception to these guidelines: a Work's "Characters" subpage. Here is where Just a Face and a Caption belongs... as long as the face and caption have a description next to them, not just a list of tropes.

If you're unsure about whether a page pic falls under Just a Face And A Caption (JAFAAC) or not, check it against these exemplars.

This character is an example of Super Speed. However, there's nothing at all in this image to tell you that. 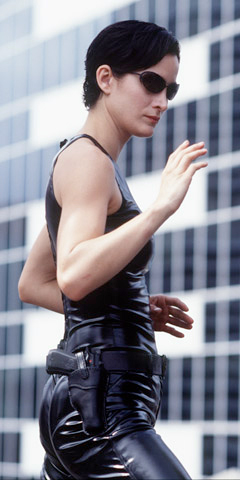 This image was used to illustrate Hackette, which is a trope about The Reveal that a hacker is female. It shows the "female" part of the trope, but without a computer anywhere in sight, the "hacker" part is sadly missing, and thus it's useless for showing the trope. 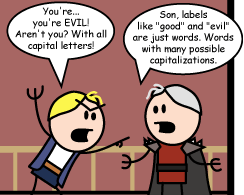 This is the page image for What Is Evil?. At first glance, it may look like all the information is in the text, making it JAFAAC. However, Elan, the hero, has some clearly accusatory body language going on, and Tarquin, the bad guy (note the Spikes of Villainy), is answering with a calm shrug. These details help convey the tone of the trope.

Retrieved from "https://allthetropes.org/w/index.php?title=All_The_Tropes:Just_a_Face_and_a_Caption&oldid=1869686"
Categories:
Cookies help us deliver our services. By using our services, you agree to our use of cookies.