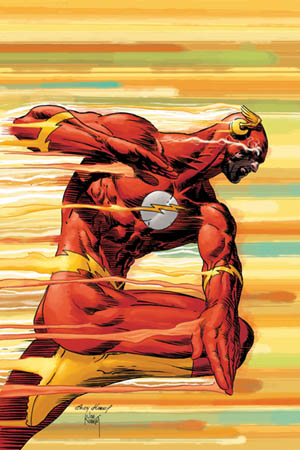 It's not Flight, but it's the next best thing. Super speed means super speed. Super speedsters are not just faster than your average human (otherwise, they might as well be cheetahs). They're faster than a speeding bullet.

Whether it's permanent or only for a single TV episode or comic book issue, whether it's from being struck by a lightning bolt, defying forces like gravity and air resistance, or using Super Serum, "speed" usually only manifests through running. However, several teen and kid heroes have used it to quickly clean up after a wild house party or to finish in five minutes all that homework that had to be put off to defeat the Monster of the Week.

Speculative Fiction writers love to apply this trope to the Theory of Relativity, The Theme Park Version of which says, "If you go fast enough, you'll alter the flow of time, and you can Time Travel to the future or the past." Characters who can't travel through time get the opposite effect: They can speed up so fast, it's as if time stops for the rest of the world. (Unfortunately, the speed factor is usually forgotten, and time is treated as if it really did just stop.) A (slightly) less egregious option is simply to have the speedster move so fast that he appears to duplicate himself - appearing in two places with so little real time passing in between that the brains/sensory equipment of any observers see him in two places at once. Extremely skillful speeders are capable of creating multiple "light clones" in this fashion.

No matter the character, there's only one Super Speed: Really Fast. Any race between such heroes will probably end evasively. It's less common than flight, which makes it neater, but still ends up being tacked on to a few Flying Bricks.

Curiously, characters with Super Speed tend to also have super acceleration and deceleration: they usually reach their regular running speed instantly and are able to stop on a dime without harm. You only see them "speeding up" if they're trying to reach some extreme level of speed they usually aren't accustomed to. They also probably need some sort of Hand Wave as to why they (and anyone/anything on their person) don't catch on fire from the atmospheric friction.

Characters with Super Speed almost always have Super Reflexes as a Required Secondary Power. The two are not the same; while someone with Super Reflexes may have the same perception of slowness as Super Speed, the user does not actually move any faster than normal, just react faster.

May show up as a Hand Wave or Justification for Martial Arts Do Not Work That Way—after all, a "highly telegraphed" roundhouse is a lot less easy to counter when your opponent's foot meets your face in the time it takes for you to blink.

Examples of Super Speed include:

Retrieved from "https://allthetropes.org/w/index.php?title=Super_Speed&oldid=1921877"
Categories:
Cookies help us deliver our services. By using our services, you agree to our use of cookies.