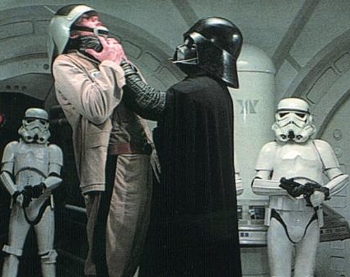 Bringing order to the galaxy. Even if we have to choke the shit out of it.

A Lawful Evil character is an evil character who either tries to impose or uphold a lawful system, and / or adheres to a particular code. They believe in order, but mostly because they believe it is the best way of realising their evil wishes, or they feel it is a realistic and necessary compromise or restraint on them.

Though Lawful Evil characters are often found in charge, these characters also make good henchmen or mooks. Though they lack any moral scruples that may impair their work, a cautious villain will find they respond well to concepts like 'loyalty' 'duty' and 'honour'. The caution however should be remembered though, as these characters also respond poorly to Bad Bosses and Dirty Cowards, as well as simple incompetence that could lead them to deciding to either find a more worthy master, or take over 'for the good of the cause'.

All four variants are likely to take advantage of Questionable Consent, pushing people into "agreements" and then pushing them to uphold their end of the "bargain."

If you have a difficulty deciding which alignment an evil-aligned character belongs to, the main difference between Lawful Evil, Neutral Evil and Chaotic Evil is not their devotion to their evil wishes, but the methods they believe are best to realize it:

In a nutshell, these are a variety of evil characters who don't care if what they do is "heinous" or "horrible", but who will always follow certain rules.

Such characters are, for example:

A warlord who would kill anyone who threatens him—and, let's say, would always spare the enemies that can serve him; or a Complete Monster who believes in playing by the story conventions; or a villain whose word is absolutely binding but would still kill a pregnant woman; or any kind of evil character that might commit mass genocide but for some reason Will Not Tell a Lie. Or a character who does, without flinching, anything their master orders them to do, anything, because their one rule is absolute obedience.

Remember, being Lawful does not imply at all that you have moral standards, and any one of these character archetypes have just as much potential as a Neutral Evil or Chaotic Evil character to be truly despicable. Being lawful is thus a matter of ethical concerns and not moral ideas; alternatively, a lawful character may work within and abuse the rules. Lawful evil is not always the "Nicest" of the Evil alignment. It is just the most consistent and orderly. In short, an evil character who feels that the rules is what gives them strength or superiority. This includes upholding Evil as an ideal in and of itself, coupled with a sense of duty to promote it wherever possible and by any means. They're likely to have standards, but they're just as likely to have such a warped moral code that they're Complete Monsters regardless.

No real life examples, please; first, this is a trope about how characters are depicted in media. Real people are far more complex than fictional characters, and cannot be pigeonholed this way. (For that matter, many if not most fictional characters cannot be pigeonholed this way, either; see below for the standards on whether to use this trope at all.) Second, calling real-life people "evil" is an extremely bad idea.

Examples of Lawful Evil include:

Retrieved from "https://allthetropes.org/w/index.php?title=Lawful_Evil&oldid=1927126"
Categories:
Cookies help us deliver our services. By using our services, you agree to our use of cookies.