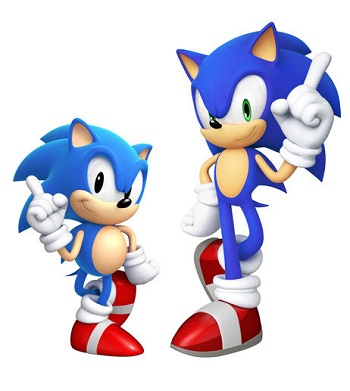 Through ups, downs, and all-arounds, still unstoppable after (over) twenty years!

A fast hedgehog, a two-tailed fox, and a red echidna who protects a bunch of Green Rocks go down to the local pub. A floating fat man with a penchant for robots bursts in on their Happy Hour martinis to announce his schemes to Take Over the World with aforementioned Green Rocks. The hedgehog, fox, and echidna put down their drinks, mutter something along the lines of "Aw, hell no!", and proceed to kick the floating fat man's ass from here to New Brunswick. Rinse and repeat, adding lots and lots more characters each time (some of which can be found here).

That's Sonic the Hedgehog in a nutshell--well, except for the pub part (and the "hell, no" part…usually). Created in 1991 for the then-fledgling Sega Genesis (and not-so-fledgling Sega Master System) by a group of fifteen people tasked with creating a mascot to compete with the face of video games (who were later to be named Sonic Team), Sonic quickly became the gaming company's mascot, immediately replacing Sega's previous mascot, the Mario-derivative Alex Kidd. The spunky, ever-lovin' cobalt-blue insectivore grew in strength with each sequel to put its creators into a healthy competitive spot with Nintendo and other, lesser gaming companies, most notably Hudson Soft and SNK during the 16-bit Console Wars.

The games were positively brilliant. The sprites were incredibly well-drawn, the levels were huge and expansive with a few alternate paths, and they incorporated many design features like loops, corkscrews, and crumbling ledges that were never seen before in any game. Many entertainment companies were given the license to produce no less than four cartoon series, seven comic series, countless books, a sunday comic strip, and even an anime movie, all to capitalize on Sonic's success. For a while, the Sonic series even overshadowed Nintendo's poster boy, Mario, due to the technical whizziness of its concept (helped by Sega dropping the meaningless term "Blast Processing" into its ads) and the proto-Badass nature of its main character. (This was the predecessor to the eventual family-friendly versus mature games debate, with a hedgehog with an attitude standing in for killing beeyotches.) And the concept was so simple: The aforementioned trio of Sonic (the hedgehog), Tails (the fox), and Knuckles (the echidna) try to thwart Dr. Ivo "Eggman" Robotnik's (the floating fat man) attempts at world domination using his army of robots and the Chaos Emeralds (the Green Rocks[1]). Run fast, collect rings, bash robotic critters, and it's all good.

Sonic hit a bit of a Dork Age during the run of SEGA's Saturn console, which was a good deal less successful than its predecessor. The spinoff game, Sonic R was the only noteworthy Sonic game on the console, with a much better one, Sonic X-Treme, being announced but canceled, and filled in at the 11th hour by a upgraded port of the less-than-stellar Sonic 3D: Flickies' Island. The series got revived in a truly 3-Dimensional incarnation on SEGA's next console, the Dreamcast. The two Sonic Adventure games are noted for their production values and ambitious plotlines, but also criticized for questionable gameplay choices and other teething problems usually found in platformers that tried to make their first jump to 3D. Sonic Team attempted to address these concerns with Sonic Heroes, yet the gameplay was arguably worsened, to say nothing of its cheesy dialogue and most of its replay value being a result of artificially prolonging the amount of times levels need to be played.

Since Sonic Adventure, fans' opinions toward this series have been extremely conflicted. Multiple camps exist defending one gameplay, character, or plotline decision while condemning multiple, if not all, others. A very strong Hatedom and counter-movement appears to form with every new release due in no small part to Sonic Team attempting to appeal to both older and newer fans despite limited production time. Some fans took refuge in non-video game properties.

Some titles in the series have been notable for suffering mixed to negative critical reception. In line with all the controversy, large varieties of theories exist to explain why the Sonic series is struggling in terms of reviews ranging from hastened development for deadlines, a lack of talent or caring from the development team, over-reliance on new "gimmicky" features, taking the series in too dark of a direction, or unrealistic demands from nostalgic fans. Nevertheless, the series still remains massively popular and is among the 10 best selling videogame franchises of all time.

Whilst 2008's Sonic Unleashed was widely criticized for its notoriously jarring Werehog gameplay, the "Day" Sonic levels were mostly praised for their refreshing hybrid of breakneck-speed 3D segments and traditional 2D platforming, replacing the Adventure gameplay, albeit with some awkward controlling at times. This style of gameplay was carried over to Sonic Colors and subsequently Sonic Generations, both of which were met with widespread critical acclaim, no doubt helped by the long-awaited return of Classic Sonic (in both appearance and gameplay) in the latter.

Sonic the Hedgehog is the Trope Namer for:
The following tropes are common to many or all entries in the Sonic the Hedgehog franchise.
For tropes specific to individual installments, visit their respective work pages.

Retrieved from "https://allthetropes.org/w/index.php?title=Sonic_the_Hedgehog&oldid=1940023"
Categories:
Cookies help us deliver our services. By using our services, you agree to our use of cookies.