Everything About Fiction You Never Wanted to Know.
Jump to navigation Jump to search
/wiki/Madman Entertainmentcreator 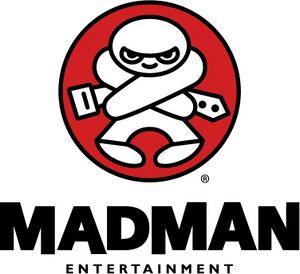 "Running a team of vigilante bounty hunters is something that I've always aspired to do."
—Madman co-founder Tim Anderson, from an extra on the Australian DVD release of Bubblegum Crisis 2032, the company's first acquisition

Originally beginning in 1996 solely to distribute anime in Australia, Madman Entertainment has grown into one of the largest entertainment companies in Australia and New Zealand, accounting for 97 percent of all anime DVD sales in Australia, with an annual turnover of around $50 million AUD.

Madman has secured the local release rights to a number of very popular franchises including One Piece, Dragon Ball, Neon Genesis Evangelion, Akira, Naruto, Bleach, and almost all of Studio Ghibli's catalogue. In addition to DVD sales, Madman also manages the theatrical release of some of their titles, particularly the Studio Ghibli movies.

Madman also sub license anime from Bandai Entertainment, FUNimation, Harmony Gold, Sentai Filmworks, Viz Media, and formerly ADV Films and Geneon. Madman has always acted as the distributor for Manga's products until 2003 when Manga Entertainment Australia Ltd merged with Madman. This happened so if Manga lost a license in Australia, Madman would pick it up. If Madman Entertainment lost the license for anime from American companies, Manga UK would sub-license anime to Madman.

In addition to anime and manga, Madman also distribute various other special interest genres such as Asian cinema, Bollywood, Action sports and even Independent films. They also have the distribution rights to original Cartoon Network and Adult Swim series.

Seriously, Madman distributes a ton of product, and only part of it is anime and manga (although they have a near monopoly on both mediums in their part of the world). There's way too much to list it all here, so we refer you to other sites: