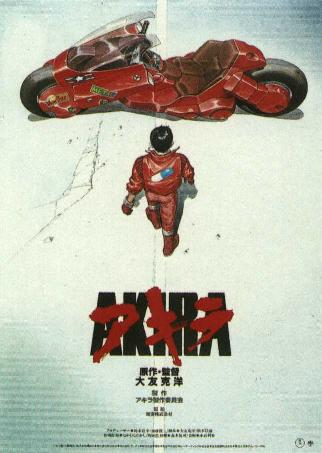 Akira (sometimes spelled AKIRA to differentiate between the work and the title character) is the name of a post apocalyptic sci-fi manga first released in 1980 and its movie adaption released in 1988. It is the most recognizable of Katsuhiro Otomo's works.

In July 1988 (or at 2:17 P.M. on December 6th, 1992), a mysterious black-domed explosion destroys Tokyo and sets off World War III. Thirty-one (or thirty-eight, depending on whether it's the manga or the film you're dealing with) years later, the rebuilt city, now known as "Neo Tokyo" has fallen into decay.

Two rival biker gangs, the Capsules and the Clowns, are having a turf war one night, when one of the youngest Capsule members, Tetsuo, almost literally runs into an escaped government test subject. Moments later, the test subject is taken back into custody by the army. However, they also decide to take Tetsuo with them. He then becomes the newest test subject for the "Akira Project". But when Tetsuo's powers awaken, the combination of an inferiority complex harbored since childhood with power beyond Tetsuo's wildest dreams waste no time in driving him insane. He escapes the lab and goes on a super-powered rampage through Neo Tokyo, killing and destroying everything in his path. It falls to a handful of people, including Capsule leader and Tetsuo's friend Kaneda, to put a stop to the destruction.

There is an anime movie version and a manga version, both widely different sans the above mentioned premise and with varying reputations. The movie is primarily known for its great animation. It was one of the things that helped disprove the Animation Age Ghetto, at least for Anime in the West. It has been dubbed twice into English: once in 1989 by Streamline Pictures and again in 2001 by Animaze via Pioneer (later known as Geneon). It is also known for its Mind Screw plot, as it primarily focuses on the first third of the manga, while simultaneously removing plotlines and incorporating plot lines from later in the manga and so on.

Being over 2000 pages in six hefty volumes, the story the original manga tells is much longer than the film, more violent, more political and more comprehensible. Critical plot developments in the film are often Late Arrival Spoilers in the manga.

A Hollywood Live Action Adaptation has long been in the works, starting in 2002 when Warner Bros. acquired the rights. Early script reviews indicate a close adherence to the manga's storyline despite the Cultural Translation, Race Lift and Dawson Casting. Cracked.com claimed to have received the actual script, which did not sit well with the fans. After being stuck in Development Hell for the longest time, it was officially greenlit by Warner Bros., with Jaume Collet-Serra as director. An all-star cast began being assembled, including at times Kristen Stewart, Gary Oldman and Helena Bonham Carter. However, this production imploded and was "shut down" in early 2012. A once-more-revised script surfaced in 2013, and Collet-Serra mentioned not long afterward that he'd been contacted about another try at the project. However, as of early 2014, the film remains in Development Hell, and in an interview with Comingsoon.net Collet-Serra offered some... interesting[1] opinions on what he saw as the fundamental flaws and weaknesses of both Akira and Japanese fiction as a whole, garnering him considerable criticism from journalists who openly wondered why he'd spent several years of his life on a project for which he apparently felt no respect.

Not to be mistaken with Akira Ishida, Akira Toriyama (author of Dragon Ball), Akira Kurosawa (Japan's greatest film director), Akira Ifukube (the guy who composed the Godzilla theme) or Akira Yamaoka (who composed most of the Silent Hill games). Or Arika, for that matter.

Tropes used in Akira include:

Retrieved from "https://allthetropes.org/w/index.php?title=Akira&oldid=1843731"
Categories:
Cookies help us deliver our services. By using our services, you agree to our use of cookies.