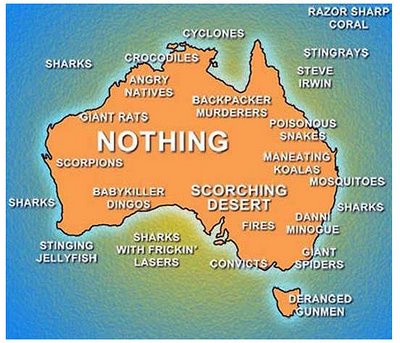 Everything Trying to Kill You... especially the sharks with frickin' lasers.

In Real Life, Australia is a vibrant, diverse and multicultural young country. Most of the population is concentrated in several large urban areas on the coast with a sparsely populated interior. In Hollywood, Australia is a primitive barren wasteland consisting entirely of Outback desert, aborigines, dingoes, crocodiles, kangaroos and some other marsupials, and occasionally a couple of rural people who run around wielding bowie knives and boomerangs. People talk with a grating accent, apparently a blend of Cockney English, New Zealander and vaguely British extraction called "Ostrayan" or more concisely "Strine".

Australia's indigenous wildlife is unique (one of the handful of megadiverse lands in the world), being dominated by marsupials rather than placental mammals. The dangers of the native animals has been noted by many - US President Barack Obama brought it up when he visited Australia. In Real Life, most of these creatures only live in remote areas. In Hollywood, Everything Trying to Kill You, although any sufficiently cute animal, no matter how wild, is inexplicably safe. This habit of making Australia a Death World often results in Australians being considered ludicrously tough - though there's some truth to that. Australia is the home of the Duck-Billed Platypus: best described as "you're not serious... right?" in animal form.[1] Also home to box jellyfish, irukandji, and blue-ringed octopus, essentially animal forms of Demonic Spiders, Nightmare Fuel, and of course, koalas. And kangaroos.

For those fortunate enough to avoid being eaten by the aforementioned crocodiles, life is one long beach party and all meals consist of shrimp on the barbie (actually called 'Prawns') and Vegemite sandwiches (pronounced "veeeeejeemoit"). If these stereotypes are absent, the setting is likely Sydney, Australia's most populous metropolis and bustling economic centre. It's the home of the famous Sydney Opera House, which all hotels naturally look onto. Australia's capital is actually Canberra, built between Sydney and the other major capital, Melbourne, as a concession to neither city being named the actual capital.

New Zealand is largely interchangeable with Australia in western media. This is especially ironic given New Zealand has a different culture, history, even ecology - its indigenous ecology almost wholly lacks native mammals of any kind. Also, its location is even more remote, being one of the last major land masses colonized by humans: the Maori arrived only in the 13th century CE.[2]

Australia's first European settlements were prison colonies. A fair few Australians claim convict ancestry with pride, truthfully or otherwise. Of course, with one of the world's highest immigrant intakes, Australians are, ethnically speaking, slowly becoming a sort of Convict/European/Asian/Middle-Eastern/Oceanian/Americas/African amalgamation.

Complicating this trope is that a lot of Australian humour involves deliberately playing up or invoking these stereotypes to mess with foreigners. Especially Americans.

For these reasons, it should come as no surprise that villains love this country.

Surprisingly, one aspect of Australia that is rarely (possibly never) played up is how important the Aussie mining industry is both historically and economically. In fact, as they have the best military in their hemisphere, perhaps the Dwarf checklist should be consulted. Gruff, gold-loving, blunt-speaking, funny-accented, alcohol-swilling, Elf-hating, boastful of their battle prowess and mainly just the fact that they are Dwarves. [3] In comparison, some have noted New Zealand's 'elvish sensibilities'.

Examples of Land Down Under include:

Recorded and Stand up Comedy