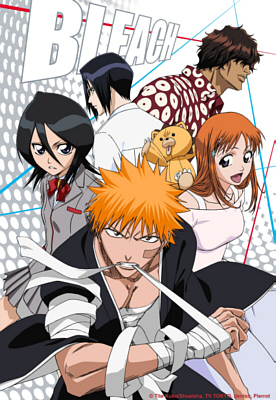 Ichigo Kurosaki would have liked to have been an Ordinary High School Student. Unfortunately, his ability to see and hear ghosts (and his orange-colored hair) kept getting in the way of a normal life. This is all he knows of the spirit world until the day he encounters Rukia Kuchiki, a Soul Reaper whose profession requires her to destroy evil spirits ("Hollows") and send good spirits ("Pluses" or "Wholes") to the afterlife. When Rukia is injured while trying to slay a powerful Hollow about to kill Ichigo and his family, she offers the boy a portion of her powers to defeat it in her place. Unfortunately, his abnormally-high amount of spiritual energy absorbs all of her power instead, forcing him to take up her duties until she can recover and return home.

Bleach starts off as a quirky Urban Fantasy action-comedy, but soon becomes a much more standard Shonen Fightin' Anime with the start of the Soul Society arc. In it, Rukia is arrested by her fellow Shinigami for the crime of transferring her powers to a human, and taken back to the afterlife ("Soul Society") to be executed. Naturally, Ichigo wants to mount a rescue. Training montages, Shonen Upgrades and ridiculously complicated plans ensue. This arc is infamous for introducing Loads and Loads of Characters (tripling the previous cast; manga author Tite Kubo has admitted that when he creates new characters, he does it to avoid writers' block), drastically changing the formula and tone of the series, and for its sheer length, which coined the meme, "Are they still in Soul Society?"

That said, this change of direction has led to not only one of the most ludicrous Wham Episodes in manga history, but many an awesome moment as well, and its continued popularity speaks for itself. Hell, it even has musicals! It remained one of the "Big Three" long-running shonen manga/anime in serialization today (or... then), and it inevitably gets compared to its colleagues, as well as Dragon Ball (of which Kubo is inspired by) and Yu Yu Hakusho (which shared the same director). It's also notable for having one of the largest Peripheral Demographics in the history of shonen manga -- it has not so much an Estrogen Brigade as an Estrogen Legion.

After 10 long years, the manga is announced to enter its final arc, which began on February 8, 2012. The anime ended after 7 1/2 years on March 27, 2012 in favor of the Naruto spinoff Rock Lees Springtime of Youth, leaving the ending to be the only arc not planned to be adapted to animation.

There are fourteen story arcs so far, including the anime-original Filler:

The English dub is currently[when?] running in America on Cartoon Network's Toonami block. The Japanese version is now broadcasting the new episodes on a one-week delay from Japan on Hulu, or on a 1hr delay for Crunchyroll subscribers, as well as a one-week delay for free viewers.

On February 22, 2012, Warner Brothers Studios announced the licensing and planned development of a live-action Hollywood movie.

Feel free to check out Ichigo's companions character sheet and six more on the other side of the link. Bleach is also amongst those few anime that earned its own Die for Our Ship, Ho/Foe Yay, Fan Nickname, Getting Crap Past The Radar, and Complete Monster pages. This page has gotten so long that it is necessary to give both the movies and the Anime their own page and character sheet. Under Construction - See the discussion page as to why.

It now has a page discussing one of its DS outings, Bleach: The 3rd Phantom.

Note: This article is not about a laundry detergent or the Nirvana album. Sorry. It also (usually) has nothing to do with Brain Bleach or Bleached Underpants.

Please revamp the main trope pages by moving all character tropes to their respective characters.

If you are watching the English dub or haven't read the manga, there are major spoilers below.

Bleach is the Trope Namer for:
Tropes used in Bleach include:

Show me your bankai, All The Tropes.

Retrieved from "https://allthetropes.org/w/index.php?title=Bleach&oldid=1966687"
Categories:
Cookies help us deliver our services. By using our services, you agree to our use of cookies.