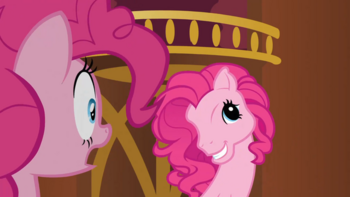 The horror, the horror

A Mythology Gag is a sort of Meta-Continuity Nod, wherein a reference to some facet of a show's mythology or past production history (which is not actually considered Canon in the context of the show) is made. This trope is usually taken largely as a bit of gratuitous humor, since if the program you're watching is "real" then the characters shouldn't be thinking in terms of any continuity, alternate or otherwise. (Sometimes this will be hilariously lampshaded by the characters, who wonder how they could possibly know such a thing. Also, the Celebrity Paradox might come into play.)

Often seen in Revivals, Reboots or Media Franchises, when an element from the previous version of the show (or from the previous show in the Media Franchise) is referenced or seen in some way. This is usually done as an acknowledgment to the fans of the first incarnation of the show. When successful, serves as a reassurance to those fans that the producers aren't trying to disrespect the original source material. When unsuccessful, only reminds fans that the original source material essentially never happened. The success of the Mythology Gag is always a matter of opinion.

Examples of Mythology Gag are listed on these subpages:
Retrieved from "https://allthetropes.org/w/index.php?title=Mythology_Gag&oldid=1938153"
Categories:
Cookies help us deliver our services. By using our services, you agree to our use of cookies.