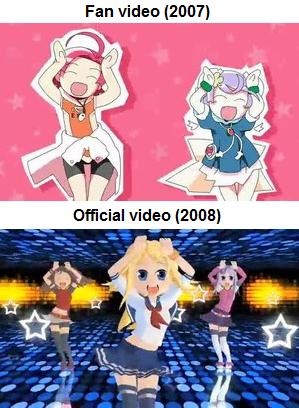 Sometimes media subjected to Memetic Mutations catches the eye of the people responsible for that media, and they decide to actually put it in. Note that this is not about references to unrelated memes, which would just be a Shout-Out.

Can be an in-joke for an Ascended Fanboy character, or a Promoted Fanboy who makes sure it'll be in the show. Can also be a result of Approval of God, where the creator would approve of fanworks and memes derived from the source material.

A Sister Trope of Ascended Fanon, Continuity Nod, Mythology Gag (the latter two are references to things that were in the show).

Compare Watch It for the Meme, Appropriated Appellation, Pandering to the Base, Forced Meme, Official Fan-Submitted Content.

Not to be confused for a show making a Forced Meme itself.

Examples of Ascended Meme include:

Retrieved from "https://allthetropes.org/w/index.php?title=Ascended_Meme&oldid=1966334"
Categories:
Cookies help us deliver our services. By using our services, you agree to our use of cookies.