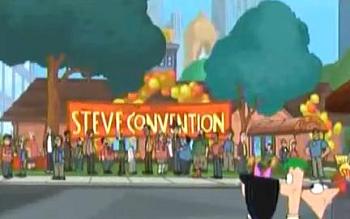 This is what happens when you break it.

A pretty rigid rule that no two characters in a work of fiction (novel, movie, play, TV series, comic book, etc.) should share the same first name, or even similar-sounding names. If there's a Laura in the story, there will not be a Lyra; if there's an Ed, there will not be a Ted. (If you wake up one morning and suddenly discover that you don't know any two people with the same first name and that your phone number begins with 555, you can safely assume you've fallen into a work of fiction.)

The rationale behind this is so obvious it almost doesn't need explanation: Both the audience and the writer will get confused by multiple characters with the same name: "Wait, was it good-guy Steve or bad-guy Steve who launched the missile?"

A strong dramatic reason to duplicate names can override the rule, as, for example, in the Jack Nicholson movie The Two Jakes, but it's so rarely done that audiences will pick up on it almost instantly. Unintentional duplication of first or last names also sometimes occurs when characters from previously distinct works of fiction meet one another, or in sprawling, shared-continuity settings like the DC or Marvel Comics "universes."

It's probably more feasible to list the exceptions rather than examples. Usually when there are exceptions, there will be a storyline involving the characters being confused for each other.

One could only wish this were Truth in Television, but as elementary-school teachers know all-too-well, names go through cycles and depending on the era, a single grade 3 class might have five Jasons, Michaels, Lindas or Coreys.

In French-speaking countries, name popularity waves are even more dramatic, to the point where you can often guess somebody's age within five to ten years just by their given name, and very popular names have been attributed to as much as one person out of seven or eight at their peak.

This is also a problem in dubbing with "dubbed names". For example, Gomez Addams in Latin America is "Homero", just like Homer the Spider. Or a mobster named Bruno showing up in a Batman (Who is known as "Bruno Díaz" instead of "Bruce Wayne") comic.

The rule may be broken for names that are pretty ubiquitous in any era, such as James, John, Mary, and so forth; then, those identical names may be tweaked for each individual. (James, for one, was the single most popular name for boys in 1940s America, with the result that there are literally thousands of 60-something American guys out there who go by "Jim", "Jimmy", "Jay", "Jamie", or the like.) Of course, more or less silly nicknames are also a solution.

The antithesis is Planet of Steves, wherein everybody is Steve.

Compare One Mario Limit, where the "Steve" is too famous for anyone else to use a similar name. Contrast Inexplicably Identical Individuals, where there is a whole bunch of interchangeable characters that look the same and may share the same name—or have very similar names. Also contrast Name's the Same, where multiple series share one or more characters with the same name.

See also We Named the Monkey "Jack" and Dead Guy, Junior, for other ways characters can share names.

Since this is an omnipresent trope, the media-specific pages list exceptions.

Exceptions to the One Steve Limit are listed on these subpages:
Retrieved from "https://allthetropes.org/w/index.php?title=One_Steve_Limit&oldid=1952896"
Categories:
Cookies help us deliver our services. By using our services, you agree to our use of cookies.