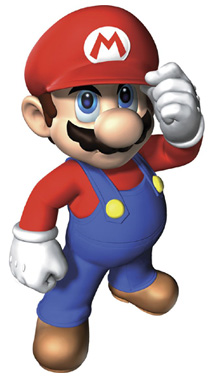 You were probably thinking about this guy, right?

In real life, the popularity of names goes up and down over time. One factor that affects this is the emergence of celebrities with a particular name; if there is some highly successful and well-loved pop star called Mario then expect the number of babies called Mario to rise significantly.

In fiction however, the effect can be reversed. If one character becomes sufficiently iconic they can come to "own" their first or last name so that whenever a person hears that name they immediately think of that character. This can cause problems for similarly-named characters who will often be forgotten or assumed to be inferior copies and so other writers avoid using the name outside of deliberate Shout-Outs to the original.

The ability of characters to cause this effect is to some extent a function of the existing popularity of their name; for a character to really achieve this distinction their name must be sufficiently obscure to be distinctive but common enough that other writers would have used it. Indiana Jones provides a prime example of a highly iconic character who doesn't count—his first name (technically, his nickname) is so obscure that it would probably never have been used again even if Raiders of the Lost Ark was a total flop (although part of that may have something to do with one of the United States of America taking that name—note that any Lawyer-Friendly Cameo will probably be named Oklahoma, Montana or similar), while his surname is too common to have any attachments to one specific individual, similar to Agent Smith.

Compare One Steve Limit, which is the principle of having only one character with each name within a work to avoid confusion. Contrast Name's the Same, where by coincidence, two unrelated works have characters with the same name. See Named Like My Name for when an ordinary name becomes famous by association with a particular celebrity.

Examples of One Mario Limit include:

Retrieved from "https://allthetropes.org/w/index.php?title=One_Mario_Limit&oldid=1892823"
Categories:
Cookies help us deliver our services. By using our services, you agree to our use of cookies.