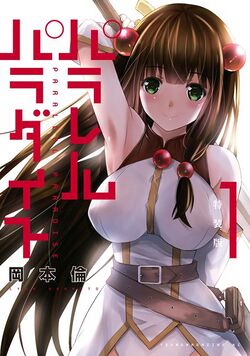 Parallel Paradise is a 2017 manga.

Youta is just a common student with a crush on his childhood friend. One day he is attacked by some mysterious masked figure in his school, and when he wakes up after a fall, he discovers he is now on a bizarre medieval-like land. Not too long after, Youta discovers the shocking reality of this world: men have been extinct for centuries. And the human females of this world really want to know what is a man...in a Biblical way.

Tropes used in Parallel Paradise include:
Retrieved from "https://allthetropes.org/w/index.php?title=Parallel_Paradise&oldid=1727589"
Categories: