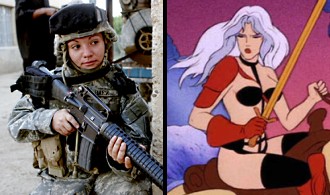 Clothing for characters will often be impractically sexy for its chosen application. Especially common in fantastic or exotic settings, where wardrobe rules are made up on the spot.

Spies will dress in a Spy Catsuit, even when the mission explicitly calls for them to not draw attention to themselves. Female warriors will charge into battle wearing a Chainmail Bikini. Bridge Bunnies on a military starship will be issued go-go boots and hoochie skirts with their uniforms.

Stripperiffic outfits on female characters—at least, young and attractive ones—are common in any genre where straight young men represent the core of the audience. This can be self-fulfilling, as sexually exploitative wardrobe choices can be a turn-off to potential female fans.

This Trope can be applied in the opposite direction; in the West, this takes the form of inserting 'exceptionally flattering' clothing for male roles, such as policemen, firemen, male gardeners or pool boys, into traditionally female-oriented fare, like soaps and prime-time dramas. But these tend to accentuate a man's musculature and physical strength, whereas women in fantasy are almost always drawn as waiflike supermodels. In Anime and Manga, however (especially those aimed at a female audience), the Bishounen can be as scantily clad as the girls.

Tropes That Lead To Stripperiffic Outfits:

Rule of Sexy is the Super-Trope.

Examples of Stripperiffic include:

Retrieved from "https://allthetropes.org/w/index.php?title=Stripperiffic&oldid=1947209"
Categories:
Cookies help us deliver our services. By using our services, you agree to our use of cookies.