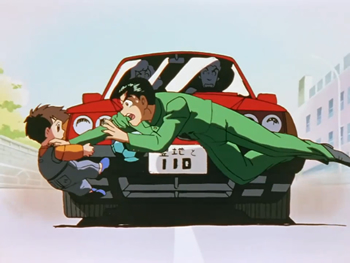 Nevermind this particular situation turned into a subversion.[1] It still makes a badass illustration.

A character does something incredibly brave and is killed, maimed, or otherwise irrevocably harmed doing it.

A bad character who was once good can redeem himself in the last act by Taking the Bullet that was meant for The Hero, thus expunging all his previous evil, avoiding forcing The Hero to arrest or confront him, and avoiding any real life penalties like disgrace and jail. This is like Redemption Equals Death. In this case, the death and redemption come in a single act.

There are essentially three kinds of Heroic Sacrifice:

See Taking the Bullet, Self-Destructive Charge, You Shall Not Pass, Take Me Instead!, Someone Has to Die, Sealed Evil in a Duel, and Heroic Suicide for specific types of Heroic Sacrifice. Usually requires that a character be Not Afraid to Die. If the Heroic Sacrifice was pre-planned, it's a Self-Sacrifice Scheme. Often preceded with a Sneaky Departure from the team, or a More Hero Than Thou dispute. A Friend in Need often requires it. Contrast Villain's Dying Grace, when a dying villain decides to save a life. The Doomed Moral Victor fights a battle where the outcome is clear from the beginning. If the character has time to say some last words before dying, they often do so in an Obi-Wan Moment. Often a Dying Moment of Awesome. Note that should the character actually survive, this Trope can still apply; all that is needed is a heroic action where the character clearly thinks the likelyhood of being killed is near-certain.

Compare and contrast Zero-Approval Gambit (where the hero sacrifices his good name instead of his life), My Death Is Just the Beginning, Senseless Sacrifice, Suicide Mission and Stupid Sacrifice.

Examples of Heroic Sacrifice are listed on these subpages:
Retrieved from "https://allthetropes.org/w/index.php?title=Heroic_Sacrifice&oldid=1894969"
Categories:
Cookies help us deliver our services. By using our services, you agree to our use of cookies.