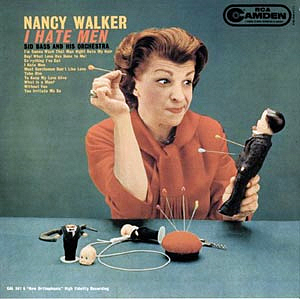 This rather vague phrase leads to tricky interpretation that's sometimes actively milked by the writers usually of romance fiction. Usually the assumption is that the character doesn't like machismo, or she has bad luck with men in her life, like her father or other relatives. That is, traits associated with men manifest into a dislike of men as a whole. This can pose a problem for any male lead trying to woo her, meaning it takes much longer than suspected to win her over. As with all dislike tropes, the degree to which a particular character Does Not Like Men varies, from simple dislike to outright hatred.

Generally, the author portrays the woman in question sympathetically, and vilifies whatever man drove her to hate the rest of his gender. The Spear Counterpart likewise is most commonly seen in romance fiction, where the male hero has had some bad past experience with women (either his mother or a faithless lover) and blames the entire gender - until the heroine comes along to change his worldview. Outside of a romance, an adult male who does not like women can be painted as a complete villain. Only little boys are allowed to believe that Girls Have Cooties.

Other times it's just lampshading to explain why a character isn't even seen with guys (not even offscreen), to entice shippers, or just to extend the possibilities of romantic entanglement you can put into a story. It's frequent that eventually one character comments on this and takes it in its most literal interpretation. Conversely, Bifauxnen and 'mundane' lesbian characters never seem to use this trope.

Retrieved from "https://allthetropes.org/w/index.php?title=Does_Not_Like_Men&oldid=1498071"
Categories:
Cookies help us deliver our services. By using our services, you agree to our use of cookies.