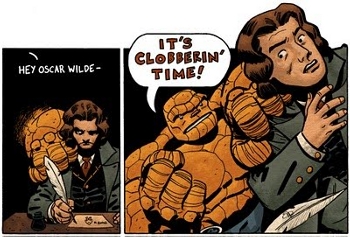 Boy, he must've done something really bad to have this comin'.

It is almost an official duty of an Action Hero to deliver sardonic one-liners. And what better time to produce one than just before the execution of the other official duty - kicking ass?

Common variations on this trope include:

Chew Bubblegum is a particularly popular example. See also Badass Boast, Badass Creed, In the Name of the Moon, My Name Is Inigo Montoya and Pre-Mortem One-Liner.

Examples of Pre-Ass-Kicking One-Liner are listed on these subpages:
Retrieved from "https://allthetropes.org/w/index.php?title=Pre-Ass-Kicking_One-Liner&oldid=1774685"
Categories:
Cookies help us deliver our services. By using our services, you agree to our use of cookies.