My Name Is Inigo Montoya 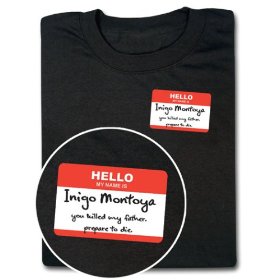 So all your enemies will know your name.

Simply put, before a duel begins, one character announces himself to his opponent without any prompting, specifically because he wants his target to know who is about to pound him.

Causes can be Genocide Backfire, You Killed My Father, or there could be nothing personal and the hero is just doing this For Great Justice.

This trope is also very common in Japanese anime, manga and videogames regardless of situation: It was part of the Samurai code of honour to tell your opponent your name before fighting them and not doing so was considered rude.

Compare Transformation Name Announcement, In the Name of the Moon, I Am X, Son of Y. See also My Name Is ???.

Examples of My Name Is Inigo Montoya include:

My name is Imigo Toyota! You killed my lawyer!

Retrieved from "https://allthetropes.org/w/index.php?title=My_Name_Is_Inigo_Montoya&oldid=1961095"
Categories:
Cookies help us deliver our services. By using our services, you agree to our use of cookies.